Spotlight on ... You'll Just Have to Read and Find Out!

Hey, y'all! Today's Wednesday Wonder is a special treat because we all know this stamper's work and have collectively drooled over it.

But before I start in on what wonderful creations this stamper makes, I'd like to address an aspect of her personality: she's really nice. I mean, Really Nice. I went to her blog last week and saw a shape I've been trying to find, and there it was on her card! The card credits listed it as a Nestibility - which was news to me as I had not seen that particular one before. I was so thrilled that I left a comment asking her where she got it, even though experience has taught me that I probably wouldn't receive an answer. (People are busy, after all.) And do you know what happened?

That woman actually sent me an email with the answer on the very next day.

(The place is called Marco's Paper, btw, and they are having a killer sale on their Nesties PLUS free shipping until December 15th for orders over $50!)

She was so nice in her follow-up, that I decided to ask her if she would be interested in being a Wednesday Wonder. (I figured that my not being a high-profile magazine or stamping celebrity with a huge blog audience might be a deal-breaker for a stamping celebrity, because people are busy, after all.) But she was thrilled to do it - even thanked me for the honor.

How stinkin' NICE is that?

So raise your Diet Cokes to Lisa Spangler, the Star Spangled Stamper!

I really don't know where to begin when it comes to introducing Lisa. If you're not familiar with her work, you are in for SUCH a treat! Lisa is one of the Creative Geniuses over at Hero Arts, and I'm not even going to try to post a listing of every competition she's won, or design team she's been on, or magazine she's been published in because I think I'm limited to a certain amount of memory here at Typepad, and I still have 28 days left in this month! Lisa is also one of those people who teach classes from here to Timbuktoo on occasion.

If I had to describe Lisa's style, I'd say it's Organized Whimsy. Her cards always have very clean lines, usually with a simple design scheme that subtly spotlights the stamped image. (I didn't really realize that last bit until I started trying to describe her style, but it's true, and now I'm really intrigued.) Yes, I know the stamp is usually the focus on one's card, but Lisa's very good at finding ways to draw your attention toward the stamp - like shining a spotlight on the image.

But don't sit there scratching your head wondering what I mean. Go look at her stuff, and I think you'll see what I mean. Of course, I could be delusional, (wouldn't be the first time) but I think I'm on to something here! And I think one of the reasons I'm right is because Lisa is a self-admitted shutterbug - and I think all that time spent looking through a rectangle and focusing in on a specific detail can be seen as an influence on her card-making.

So that's all the "Organized" part. The "Whimsy" part may be easier to spot. She favors attractive colors and tends to use her embellishments in unique ways. She also comes up with whimsical compositions. Like, who can forget this one? 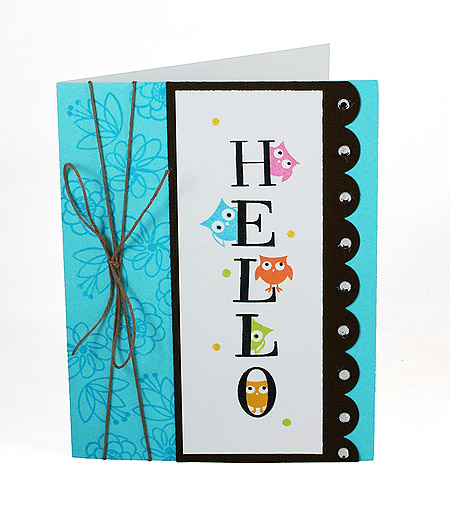 I mean, how stinkin' clever and cute is that? (Maybe that's what we should call her style: Clever & Cute.)  Watch the video on how to make this puppy!

So, without further ado, here's a chance to take a peak into Lisa Spangler's life as a stamping artist....

1. Do you pre-sketch a design or do you just leap out of the gate? How long does it usually take you to make a page? A card?

I do both!  I've been known to LEAP up in the middle of the night and sketch a card -- just ask my poor husband, ha ha --  or do sketches during boring meetings or when I'm on hold on the phone --  but usually I just start stamping.  One thing I like to do is to get a piece of used printer paper and just play around and stamp some stuff on it to see how it looks together -- then I don't have to waste "good" cardstock.

2. How many, on average, pages per week do you make? Cards?

Pages, not so much -- I am more of a mini-book person.  I like to give them as gifts, so I usually only do them when an event rolls around.  The last one was for my sister's 30th birthday, I used all these old school pictures of her, plus baby pictures and then pictures of her wedding at the end.  The number of cards per week varies a ton.  I'd say probably 3 per week average.

3. How has your process evolved to make you a leaner, meaner crafting machine? (In other words, what are some lessons you've learned or tips you can share that allow you to make better and faster design choices?

When I make something, I usually pick out the stamp first, then figure out what colors I want to use and then it all flows from there.  I like to keep a journal of color combos that I think are neat for inspiration. The biggest lesson I've learned is to not worry about all the little flaws that I see in my stamping.  Most of the people who I give my cards to never notice them at all.

4. What's your stand-by, FAST dinner solution for those times when you really want to get to your scrap space ASAP (or stay ALAP)?

Pizza!  I keep those frozen pizza shells on hand and can whip up a pizza in 15 minutes flat!  Plus I can put healthy stuff on top, so I don't have to feel as guilty about it...!

5. If you were stranded on an island that had a billion supplies but NO tools, what ten TOOLS would you HAVE to have? (All the stamps in the world are available, so you don't need to list them as one of your tools. EX: we've got all the embroidery floss in the world, but you're going to have to bring your own needle if you want to use any of it!)

WOW, what a tough question!  I guess I'd have to have my Cuttlebug, and then my Nesties (does each one count separately?  I don't have to chose, do I?).  Swiss Dots embossing folder, Prismacolor pencils, a pencil sharpener, metal ruler, Xacto knife, Crop-o-dile, scissors and double-sided tape.

6. If you were still on that island, what kind of noise would you want (if any) in the background? List as many as five different favorite musical artists.

I think in the mornings and evenings I'd just want to listen to the sounds of the island.  But then in the afternoon I'd need some Feist, Jay May, Katie Herzig and Yo Yo Ma.

7. If you could have anything you wanted, (concerning scrapping or stamping) what would it be?

This may sound corny, but I think it would be to make people happy when I give them one of my creations.  And to have FUN -- because to me, that's what stamping should all be about.  :)

8. What about your style/artistry are you least satisfied with?

Hmmmmmmmm, I don't think I really have a style?  I guess that's what I'm least satisfied with.  Gotta find some signature "look"!  :)

You already have one – you just haven’t analyzed it. Which is a GOOD thing. The minute people start thinking about this stuff they get all self-conscious and lose their creative way.

9. What cameras have you tried, which one is your favorite, and why? (You can shorten this to just the one you're using now if you like.)

I am a photo nut and have tried a ton of cameras and I love them ALL!  For taking pictures of cards, my go-to camera would be the Canon Digital Rebel Xti.  With a 50 mm lens and a tripod.  :)

10. What's the word or phrase that comes to your lips when you mess up while creating? ("Unprintable" is definitely an option!)

Usually it's "Oh nooooooooooooooooo!!!!' followed by lots of laughter.  Unless I've really, really, REALLY messed up something that took me hours to do, and then it's definitely unprintable, ha!

Don't forget to enter the Worst Catalog Gift of 2008 contest!

Prizes are to be had, so enter now and don't miss out!!!

Posted at 11:09 AM in Wednesday Wonders | Permalink

Yea...Love Lisa she is so dang talented and I adore her work!
She is such a nice persone too.....
Thank you Deborah for Spotlighting her and letting us into her world a bit....

What a treat!! How fun to learn more about Lisa!! And what an incredible person she is to take the time to share with us in the middle of her week on the blog!! So glad to peek into her stamping life!! And what a dear person she is, wanting to make others happy rather than wishing for a dream stamping room!

Thanks, Gigi, for choosing Lisa! She is always willing to go the extra step to help us....I had a similar experience to yours, and she wrote me right back too!!

I love her fun style, and am so glad that she's a part of Hero - her projects are always fun and I always learn something from them.

Hi, Deborah! Great interview with Lisa Spangler. Her personality and yours both really shine through! :-)

Thanks so much Deborah for all of the kind words! I am blushing with embarrassment over here. It truly is an honor!

And, I never really thought of myself as a celebrity before...although I must admit that I do kinda like Star Spangled Stamper, hee hee. :)

thanks for another great interview Deborah! i think it's great that you got to feature such a well-known stamper! :)

Thanks for highlighting Lisa on your blog. She is really talented and I love seeing what she creates!

I'm so glad you featured Lisa! She is just a beautiful artist... you can see her love of nature in her work - which I just admire!!!! Super great week!

Glad you snagged Lisa as your WW! Lucky for us that we got to know her a lot better, too, after your interview. It's because of Lisa that I tried intaglio pieces and stamping on felt. She's so giving of her talent and just makes me feel like I WANT to try different techniques and ideas. Great choice, Deborah! Thank you!

Hi, Deborah! Congratulations on your honorable mention on the Hero Arts blog this week for your pretty bookmark! Wooo-hooo! :-)

Great interview Deborah! Lisa is as sweet AND as talented as they come. Love that girl! She's the kind of person whose very presence lifts your spirits...even if only through email. Thanks for shining the spotlight on her this week! And...you totally nailed the description of her work!! :)

It makes me happy to know the story/stamper behind a great card..thank you for featuring such well-known artistic stamper like Lisa. Thank you, Lisa, for sharing your time and expertise in stamping. Excellent work, Deborah!

Thanks for the interview,Deborah! Lisa is such a sweet person and it's a pleasure to see her creations on HA blog. I can feel her smiles on her voice during "watch it Wednesday". Just love her stuff. Thanks again.

I am happy that Lisa is being given recognition for sharing of her creations. She is a talented lady. :) thanks Lisa for taking the time to share your world of Art. The people over at Hero Arts are the nicest and very generous.