That would be our very own Jenn Biederman.

She’s on her way to stamping fame and fortune - and not a minute too soon. The woman’s obviously got talent. And she’s got crazy-mad ink skills. Oh, and let’s not forget her tremendous originality and kick-butt designs. As Gigi would say, “She’s the Real Deal, Lucille!”

I’ve been saving her - as a Wednesday Wonder - not for, like, lunch or anything - for a special occasion, and since she just received her terrific news, I figure that's a pretty special occasion! Getting published is one thing, but to make the cover!! That’s hitting the mother lode. And the cover of Cards?! That’s like the card-making world’s version of Rolling Stone!

So I was right. Jenn's a rock star. You wanna see her magnificent creation, you'll just have to buy the magazine! Or stare at it - longingly - from a distance while standing in the check-out line of Hobby Lobby.

And that is just so ungratifying.

Of course, Jenn has other credits to her name. She’s received 1st, 2nd, and 3rd place awards and Honorable Mentions on the Hero Arts Blog. She’s been published in the Aussie Scrap Source Blog, and she’s on the DT of Purple Onion Designs.

1. Do you pre-sketch a design or do you just leap out of the gate? How long does it usually take you to make a page? A card?

I do like to pre-sketch ideas while I am watching the television in the evenings (usually HGTV).  I typically stick to the sketch, but sometimes I deviate away from it… just depends on how the creative juices are flowing.  I am inspired by patterned papers & sometimes I just start putting together a card without a sketch.

Oh, my… it takes me a while to make a card and even longer to make a layout.  I ponder my work quite a bit and move elements around… I’m sure I waste a TON of time doing that.  I am a daydreamer, so that doesn’t help!!!  I would have to say it usually takes me approximately 3-4 hours to make a card and 5-6 hours for a layout (this includes the time I am pondering, daydreaming, whatever you want to call it)!

Oh, praise be! AT LAST!!! Somebody else who spends hours on a card. I feel so much better now.

2. How many, on average, pages per week do you make? Cards?

I try to make at least 2-3 cards a week.  I work 2 days a week at the local college, and I usually do not get much else done on those days.  My days off include housework and taking care of my 9 and 3 year-old daughters.  My daughters play in my scrap area and sometimes stamp right along with me…. I’m raising them right, aren’t I?!?!

As long as they’re not sniffing the glue, I’d say you’re doing fine. 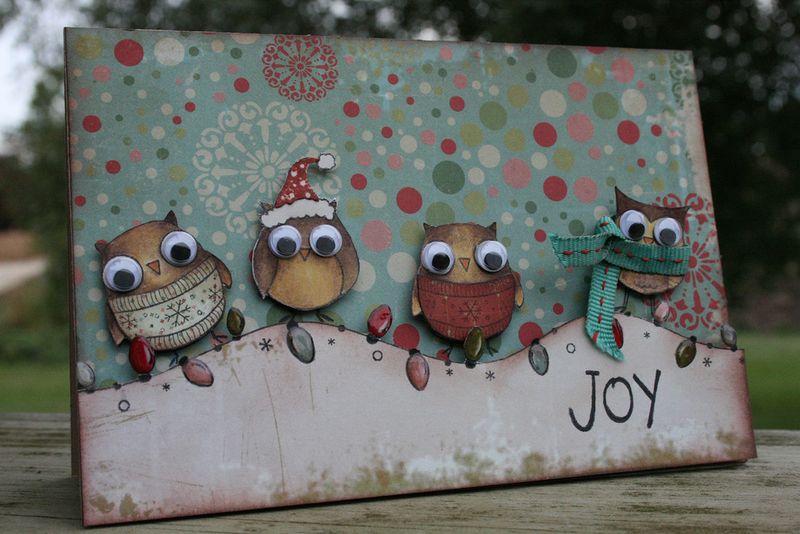 3. How has your process evolved to make you a leaner, meaner crafting machine? (In other words, what are some lessons you've learned or tips you can share that allow you to make better and faster design choices?

I would have to say sketching my design first would be the way I have tried to speed up my creative pace.  I’m not sure I would say I’m faster - just a bit more aware of my time.  As far as some tips… just be yourself, find your style, and stick with it.

4. What's your stand-by, FAST dinner solution for those times when you really want to get to your scrap space ASAP (or stay ALAP)?

My husband!  While he’s cooking, (he loves it) I can spend time with the girls or be at my scrap space.  I am so grateful for that! 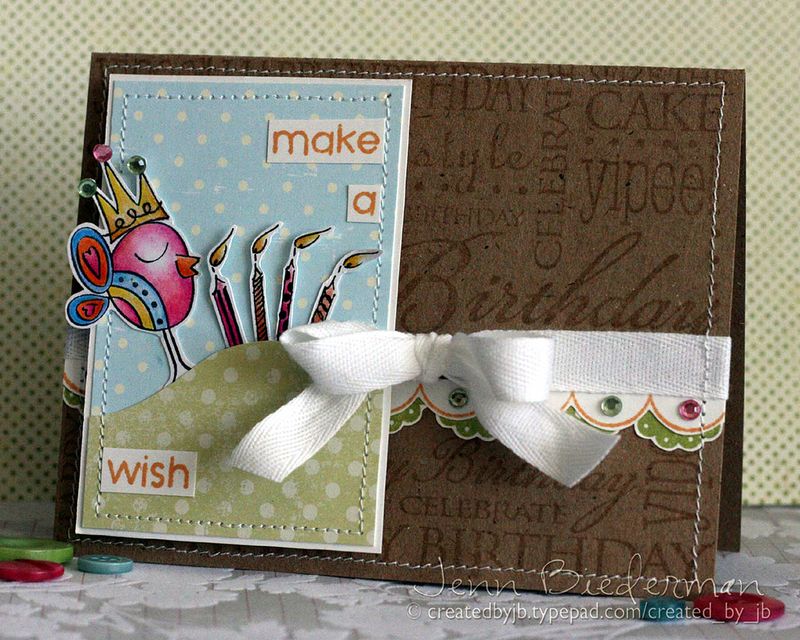 5. If you were stranded on an island that had a billion supplies but NO tools, what ten TOOLS would you HAVE to have? (All the stamps in the world are available, so you don't need to list them as one of your tools. EX: we've got all the embroidery floss in the world, but you're going to have to bring your own needle if you want to use any of it!)

X-acto knife, (I have been using the same one since I was in 9th grade… looooong time ago) big Fiskars scissors, (I dislike small ones) paper trimmer, heat gun, stapler, bone folder, self-healing cutting mat, (gotta have this for my x-acto knife) acrylic blocks, camera and computer (I am completely confident that my island will have electricity so I can keep uploading pictures to Flickr...hee hee!).

But of course it has AC! Do you really think after spending the last four summers in my sweltering un-air-conditioned attic that I would allow my fantasy island to be without AC?! Silly woman.... ;~)

6. If you were still on that island, what kind of noise would you want (if any) in the background? List as many as five different favorite musical artists. 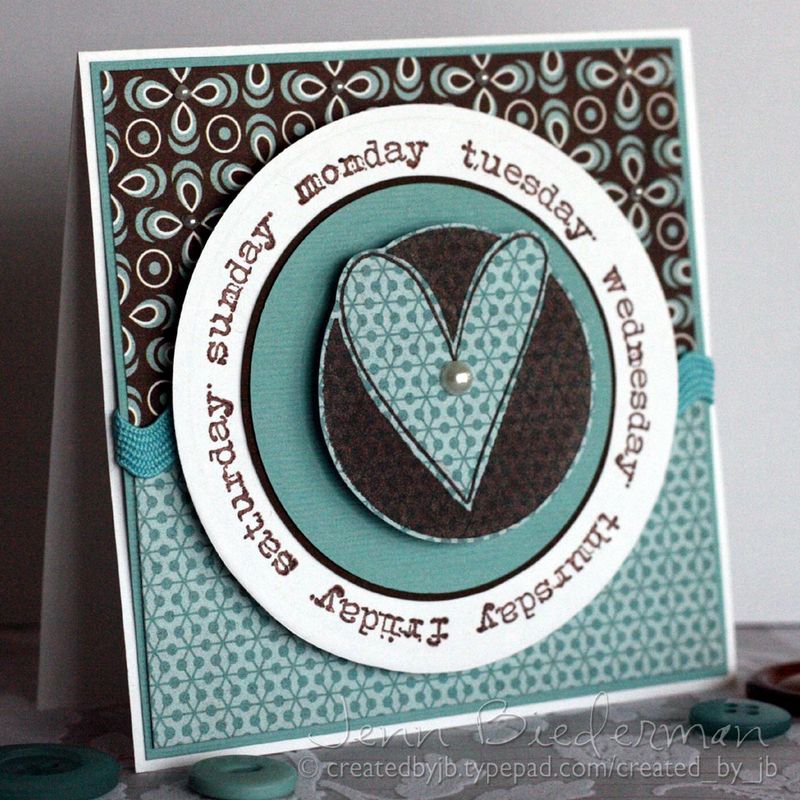 7. If you could have anything you wanted, (concerning scrapping or stamping) what would it be?

Right now my scrap space is in the corner of our dining room which is open to the living room.  A door to my scrap space would be nice.  Ok… even better would be a door that leads to a scrap room that is completely mine… all mine!

Given how many people want that very thing, we seriously need to think about a way to make it happen. Share building tips or something....

8. What about your style/artistry are you least satisfied with?

It would definitely be my lack of speed.

You and I suffer from the same malady. Isn’t there a pill we can take or something? I mean, they put a man on the moon for crying out loud! Oh, wait. They DID invent a pill. It’s called SPEED. It's all becoming clear to me now. We got no speed 'cause we got no speed.... Dang it! 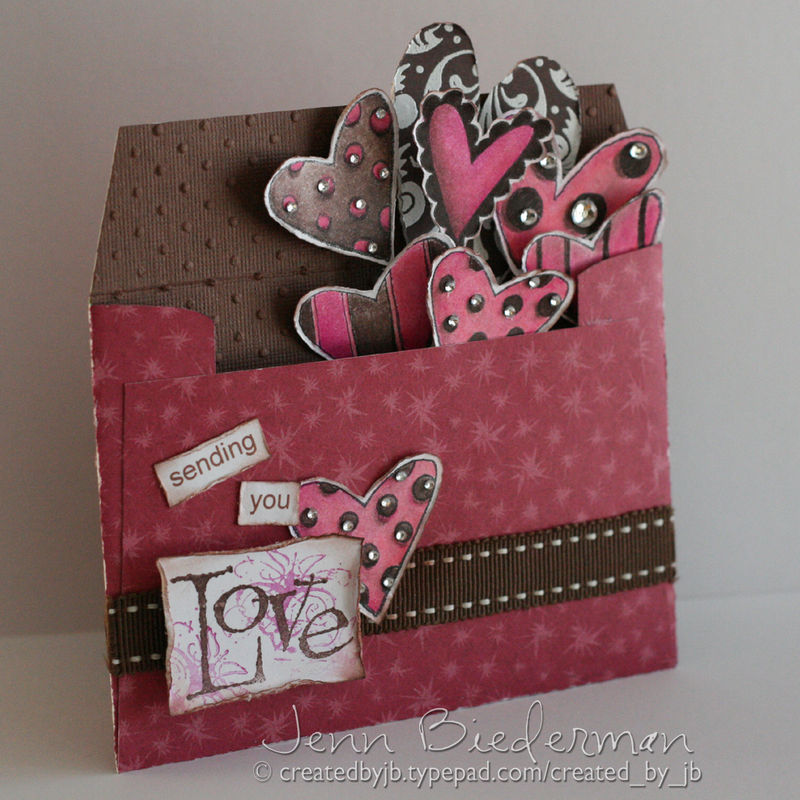 9. What cameras have you tried, which one is your favorite, and why? (You can shorten this to just the one you're using now if you like.)

Canon Rebel XTi (works great as long as you don’t break the lens…ahhhh!

I think that’s like seventy years of bad luck (camera years being 10 to our 1).

10. What's the word or phrase that comes to your lips when you mess up while creating? ("Unprintable" is definitely an option!)

Sugarbush? Sugarbush.... I think I like that one. Kinda catchy. Okay, you do realize that now you’re going to have to tell us how you came up with that, right?

If you would like to see more of Jenn’s work, (and I highly suggest that you do go see more of Jenn’s work) you can visit her Flicker photostream as well as her 2Peas photostream. And, of course, there’s always her blog, Created by JB. (Make sure you have several hours at your disposal, though. You’re going to need time to review all her lovely designs, and THEN you’re going to need time to make something yourself because her work has a way of generating a very strong creative itch that yearns to be scratched.)

I am so happy Jenn's work was selected for the cover!! It was hands down the best! Thanks for the Wednesday wonder interview with this amazing artist! I love seeing her work!! Congratulations, Jenn! Keep on sharing with us!

Another Great Interview, its so interesting to find out more about our fellow crafters.

I love Wednesdays on your blog!!!!

I have always been a fan of Jen's from the very minute I saw her work! I jumped up and down for her when I heard her news!

And, as a subscriber to CARDS I look forward to August!!!

Excellent choice (and timing) for this week's Wednesday Wonder. Congratulations to Jenn (I think we ALL love her work!), and thanks again to Deborah for sharing the inner details of some of our favorite paper artists!

Great interview with Jenn! Love her to pieces!! And I KNEW she would be chosen for the cover even before I saw the numbers! Now the rest of the world will know her and love her work, too! Yay, Jenn!

Great interview - the shapes this week were incredible.

Jenn, SO happy for you - cover of a magazine! I'm thrilled for you. This must be so exciting. Hugs across the miles.

Hey Deborah! Thank you so much for your absolutely kind words! I always laugh when I read your blog...you are a hoot! I'm sorry I wasn't able to leave a comment yesterday...I briefly checked your post prior to going to my doctor appointment and then the rest of the day went "poof" and it was gone. Thanks again for the wonderful interview and the honor of being the Wednesday Wonder!! You ROCK!

Awesome interview as always! She is totally on fire right now too.

Thanks for featuring one of my favs Deborah! Jenn, you are a true artist and a super cool girl!

Love Jenns Work she is amazing to say the least!....it was another Wonderful interview...thanks so much Deborah!

Great interview! I'm constantly amazed by Jenn's cards week after week. Not surprise at all that your card is going to be on the cover. Yay for you!!!