I have a demonstration video for your viewing pleasure and edification. It's all about masking and stenciling. I know it's probably very old hat to most of you, but I'm still trying to get this whole video-making thing down, so it's going to be pretty simplistic for awhile.

The good news is that I learned how to adjust the brightness, etc, so things are a little less dark this time around. I'm hoping I won't have to make that adjustment manually in the future, though. I got my hands on some overhead task lights from IKEA, so I'm hoping they'll install easily and light my desk like...I don't know - something really BRIGHT.

I know! I know! Like "Moonlight in a Martini"! (Can anybody name the movie this came from? How about the actor who said it? Or the actress to whom it was said?)

Our lines are open, callers!

More good news about this video... sort of. After about 37 takes, I was able to finally get a handle on recording a voice-over, so this time around, you get to hear my voice telling you what you can clearly already see in front of you.

As opposed to listening to some cool Brazilian music. (This is why I'm not so sure it's such good news that I'm actually narrating this little flick.) Another negative is that I am totally congested, so my voice sounds very annoying.  However, I managed to keep from sniffing, sneezing, coughing, and hawking up phlegm, so THAT'S certainly a positive, right?

Finally, no animals were harmed in the making of this movie... although I did manage to break three nails.

Which was a real bummer. What with Easter coming and all.

But I digress. The challenge at the Hero Arts Blog last week was to do a one-layer card - and that almost certainly demands masking and/or stenciling, so I decided to do both with a Cuttlebug die of a butterfly. I also employed a little embossing (old school). Here's the card: 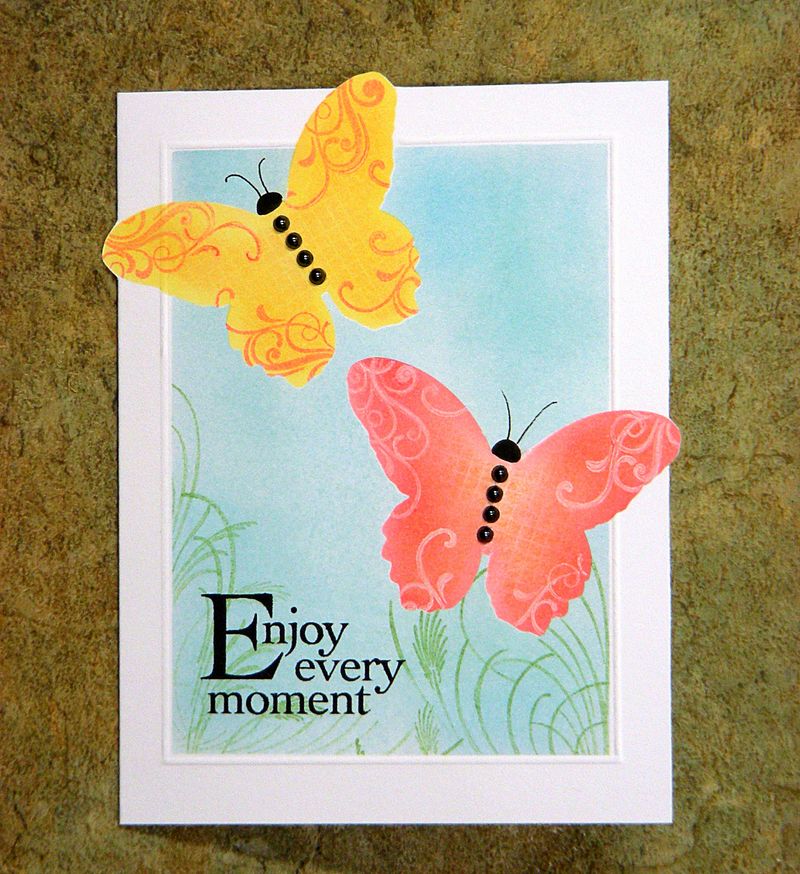 And here's the video (you can double-click on it to see it at YouTube if you prefer. It's available in HD, either place, I think.)

Enjoy and have a terrific Easter!

Neat Video! I dont have any die cutting machines though : (

What a treat to hear your voice! Although that Brazillian music was pretty cool. Great video. Eclipse tape is new to me, but looks like a must have. Any online source? Congratulations on your new video career! Judy

Another excellent video and great to hear your voice (congested and all). I know how much work it takes to get these type of things done, so kudos to you!!

Awesome, video! So professional....love your voice! You're such a trooper for doing this WITH congestion!! Thank you!!!

I like it! Thanks so much for going to all of the trouble, but it was fabulous.

Fabulous video, Deborah! Very clear and clever. Thanks for sharing!

Great video and card! I am happy you are
adding videos to your blog--thanks for the
inspiration.

Enjoy you video a lot! Thanks for sharing!

Great video Deborah. You make it look so easy. Keep up the great work.

great video..the narration was very easy to understand and added a lot to the instruction. Thanks for the tip on eclipse tape, I used to use Masking Magic but can't find it anymore.

Great video... that tape is great - made it so nice and easy. Thank you for the tips and the video!

Awesome, Deborah! I could see your fantastic how-to video, of course, I could hear your voice!!! :)
*I'll try to save this in my HD. Thanks a lot!

Nice video. In the photo it almost looked the the butterflies were cut out, but once I saw the video, I saw the magic