Last month I invited folks to sign up for a card swap, and we had a dozen participants from all over the world: Australia, , , Japan, , , and the United States.

This month we did it again, and we doubled our number for a total of 25 card makers, and we added Croatia, Canada, and England to our list of countries represented. Is that awesome or what?! I absolutely LOOOOOOOOOOVE the power we have to shrink our world just by using paper and glue and a little tool called the Internet.

Unlike a traditional card or ATC swap, this style of exchange involves making one card and then sending it to the person above you on the list. We had three different "challenges" to choose from: 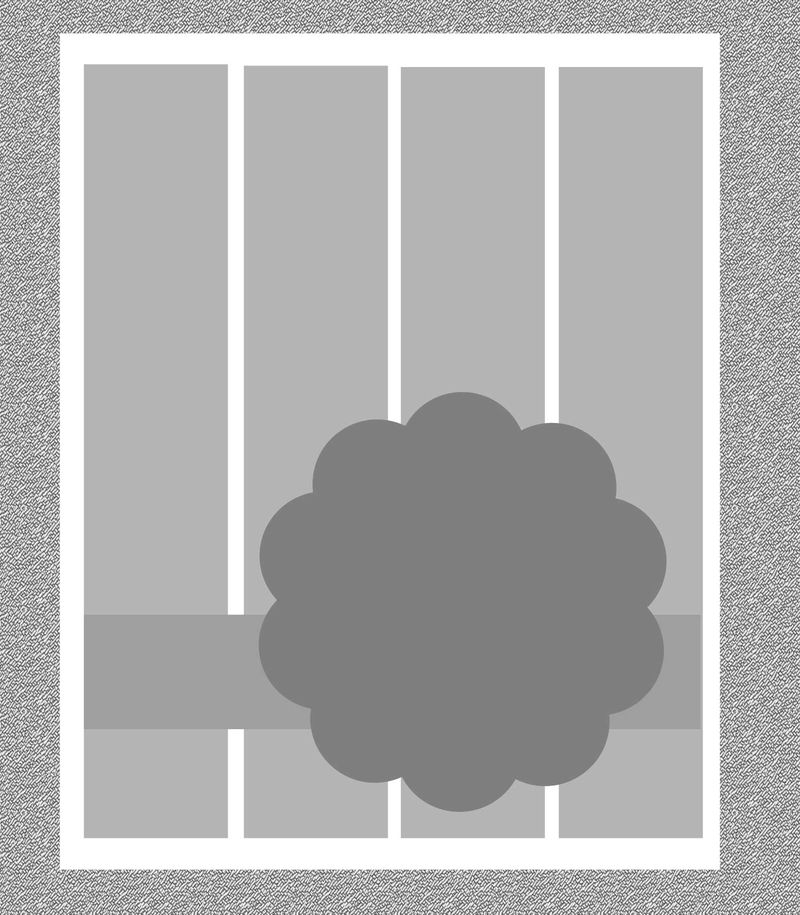 Check out the cards below; each has a link to the artist's blog or photostream so you can see more of her work. AND Paula sent a second card, to boot: 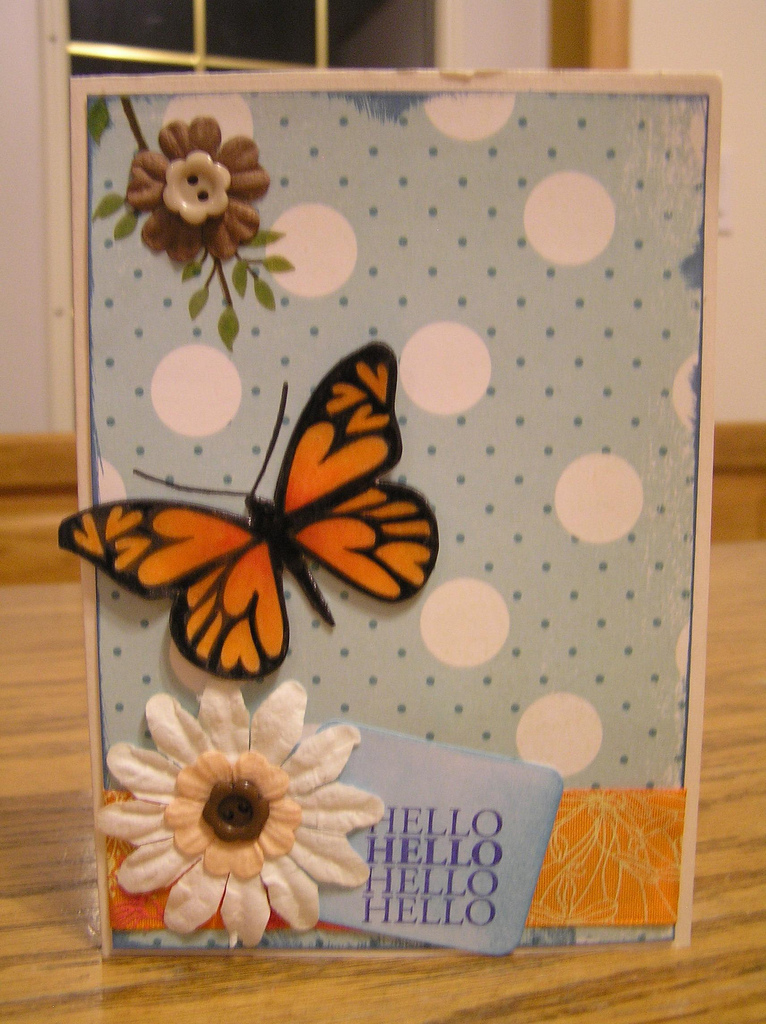 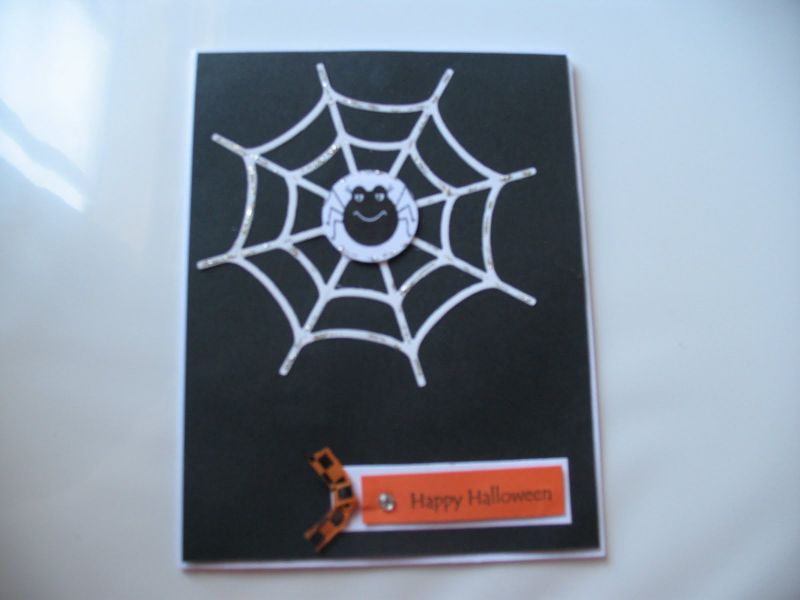 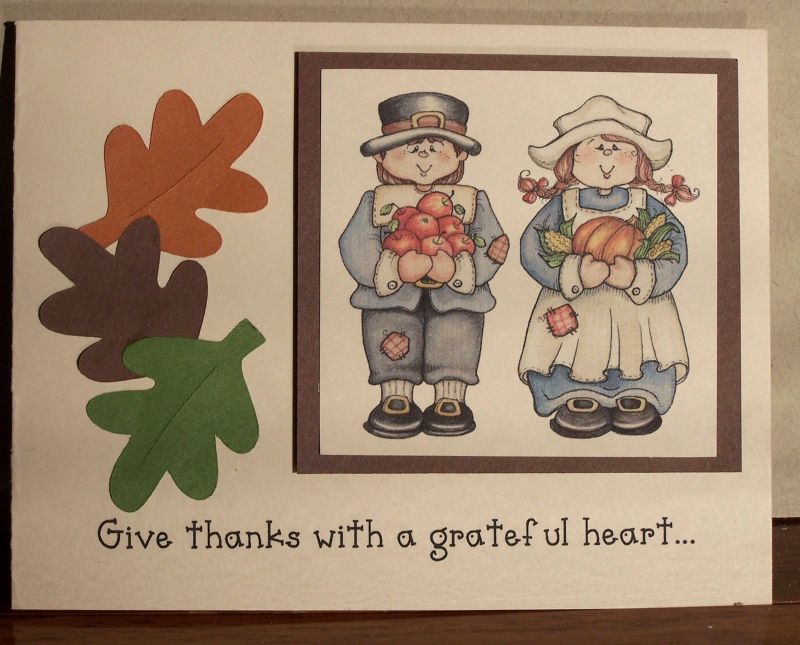 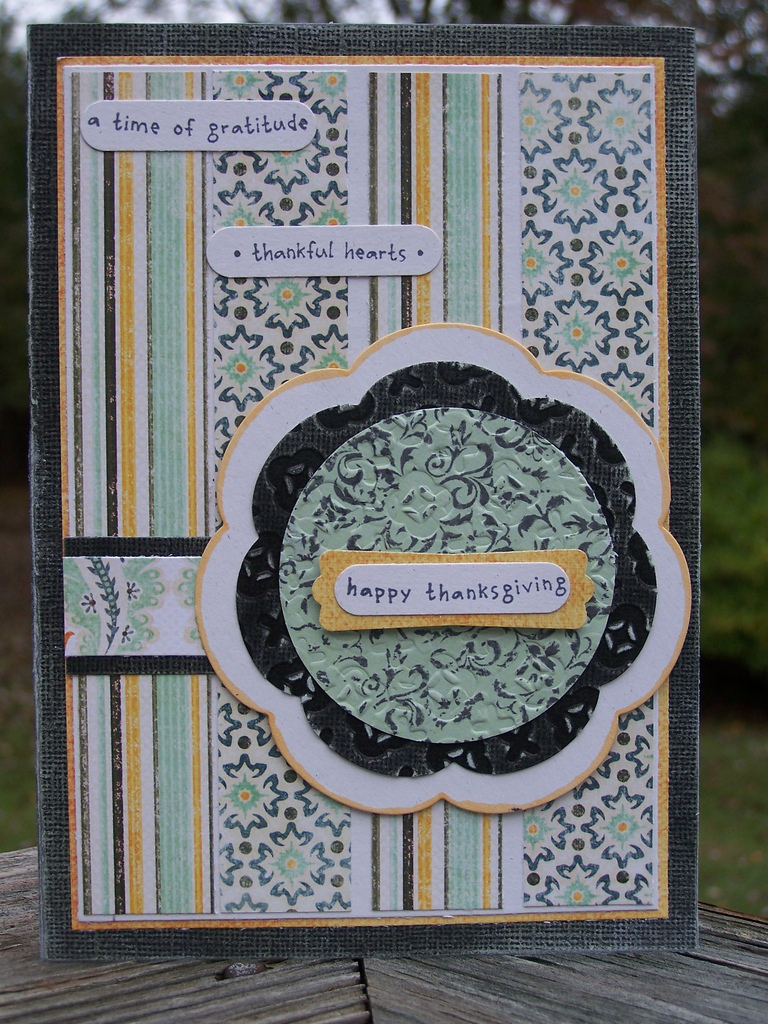 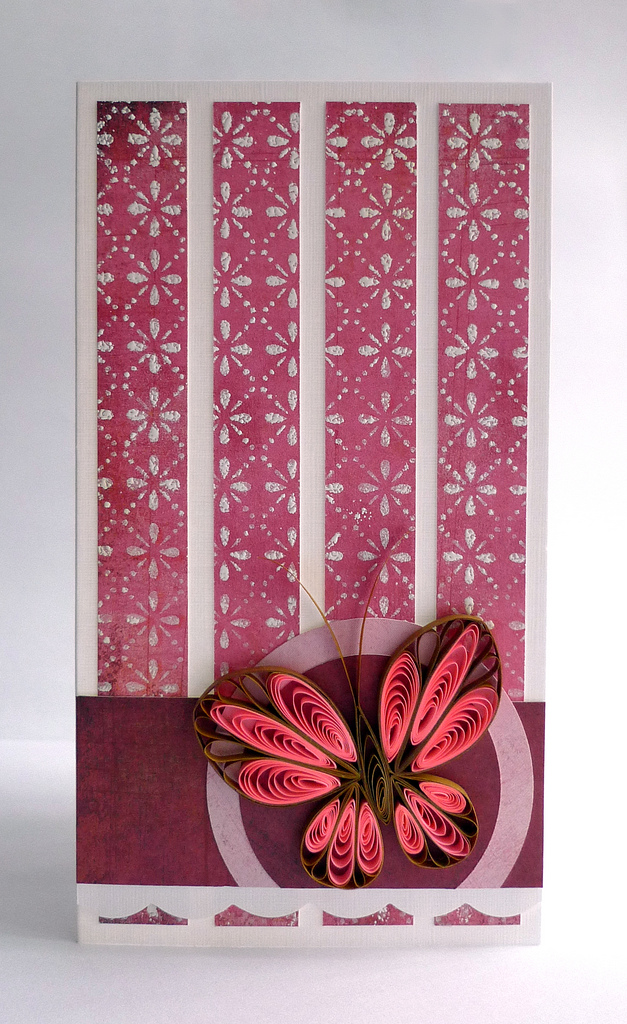 and here's a little close-up of that butterfly: 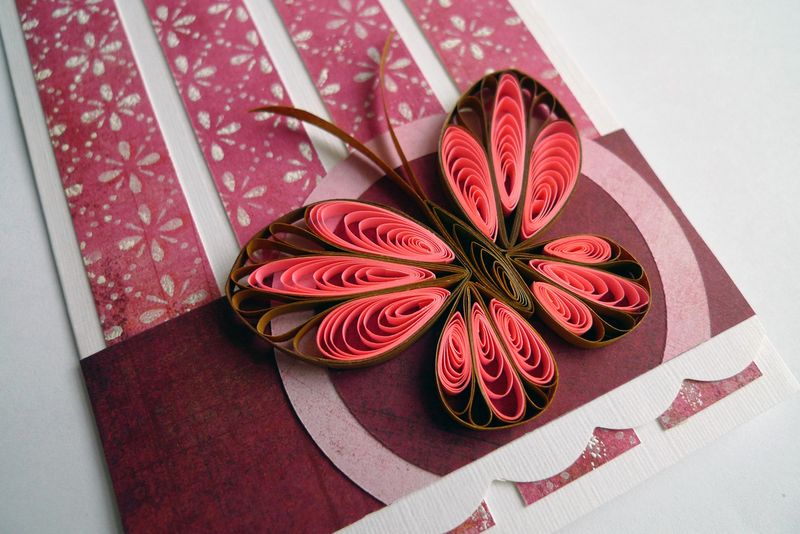 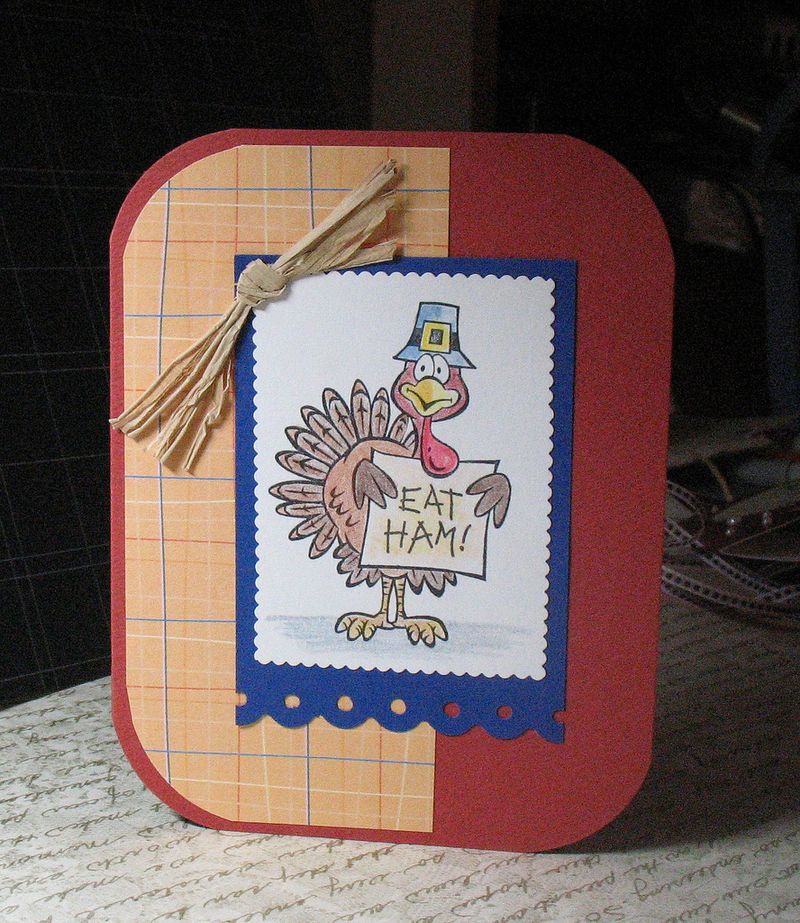 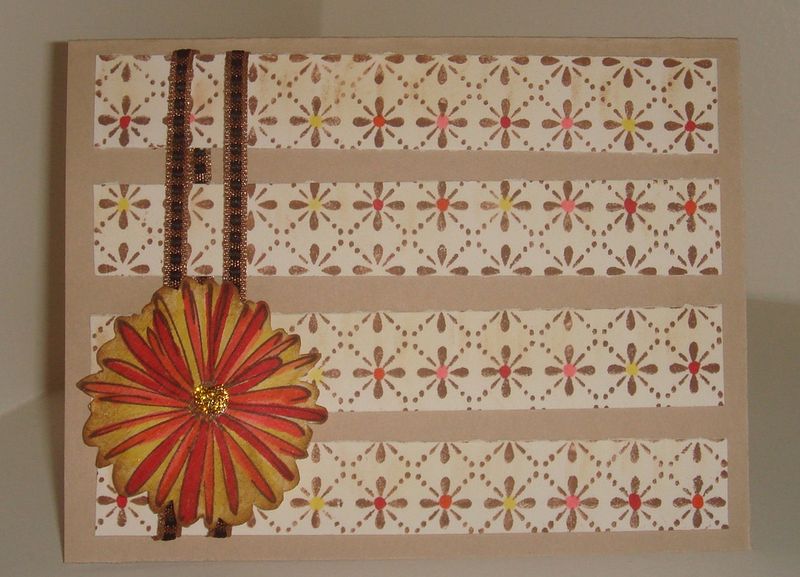 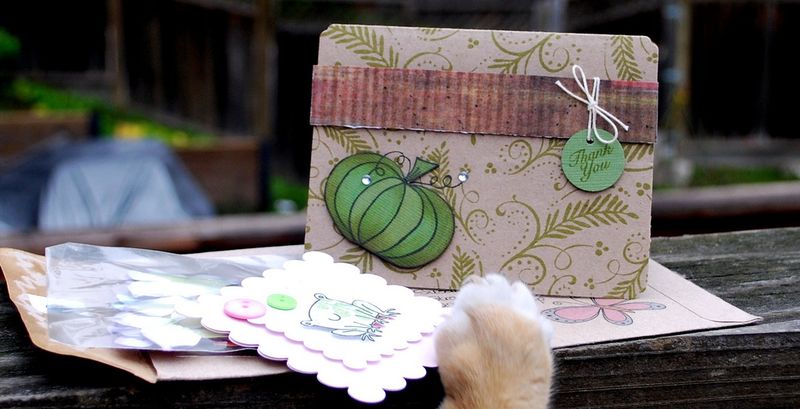 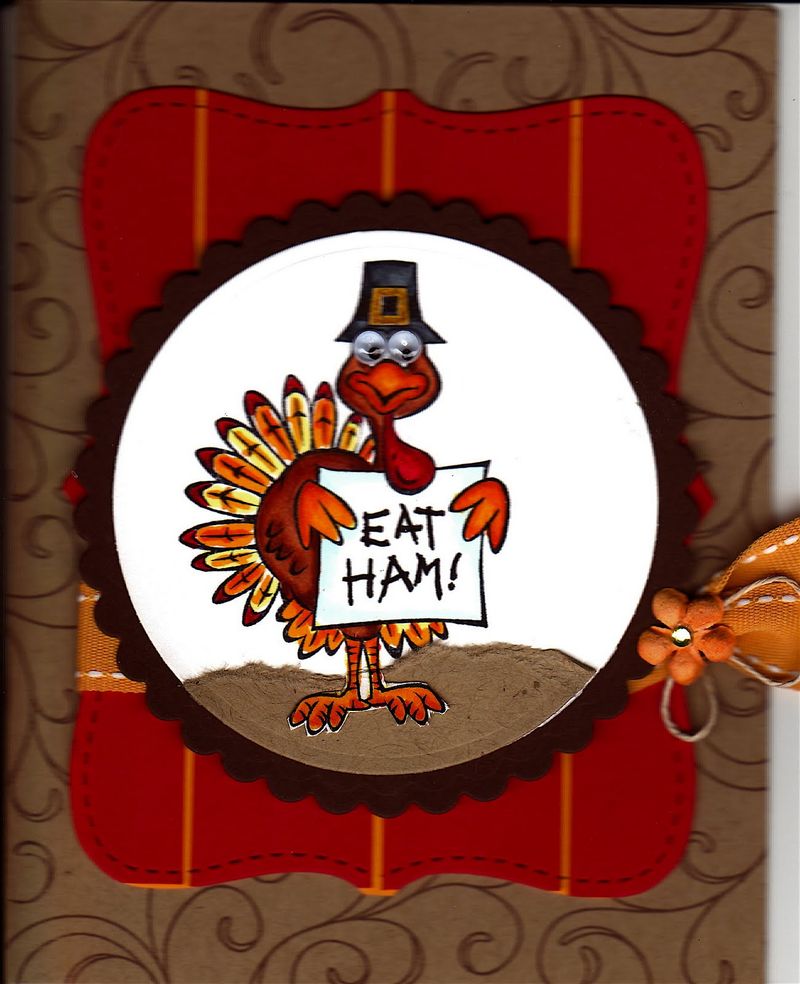 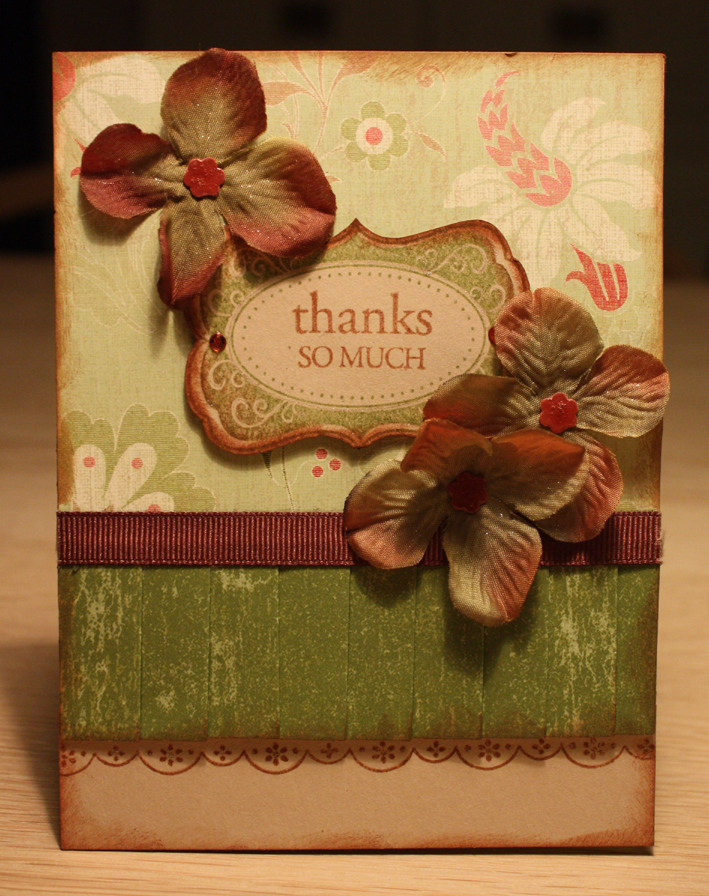 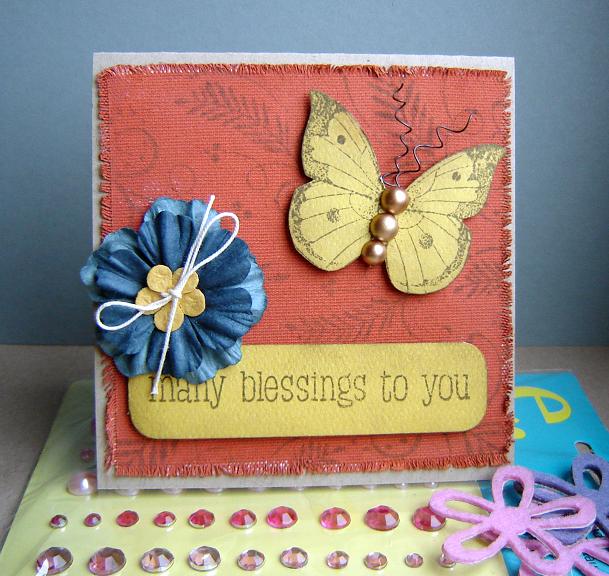 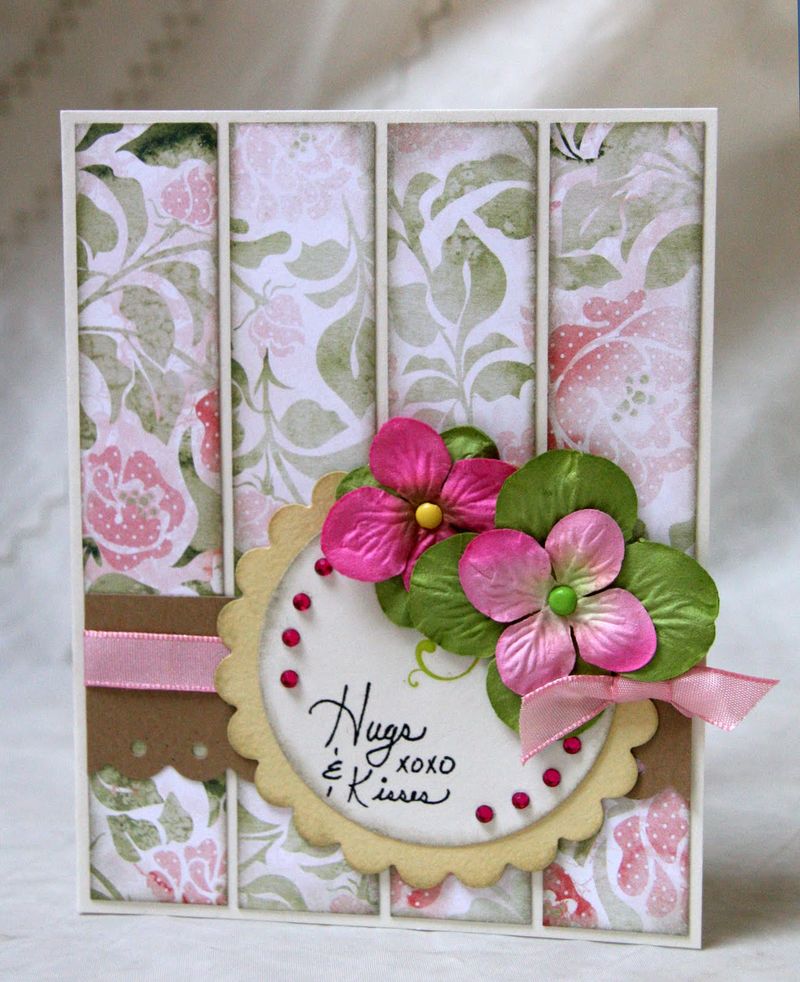 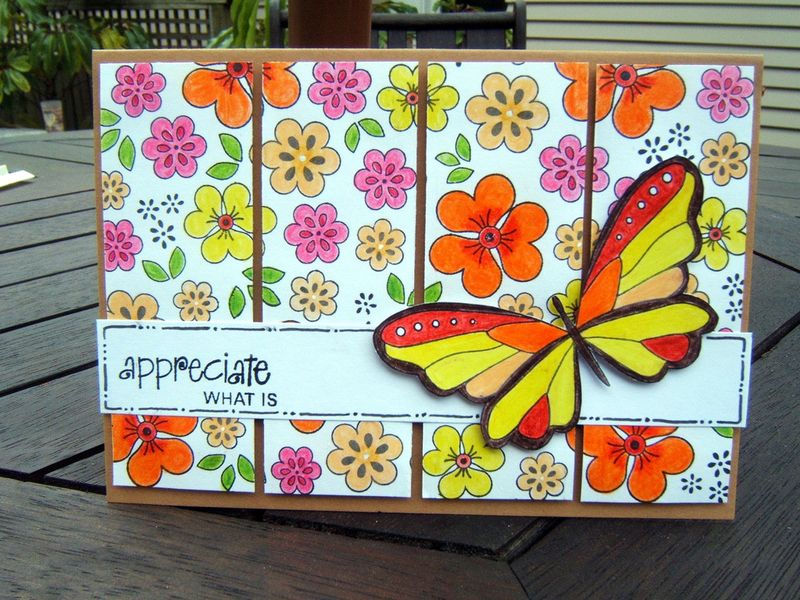 Dawn in New Zealand sent Judy in Alabama a card and a bookmark: 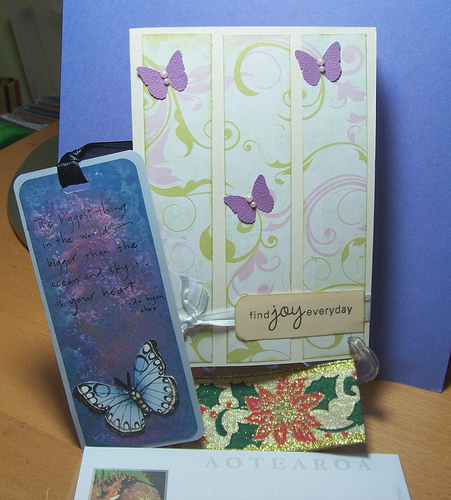 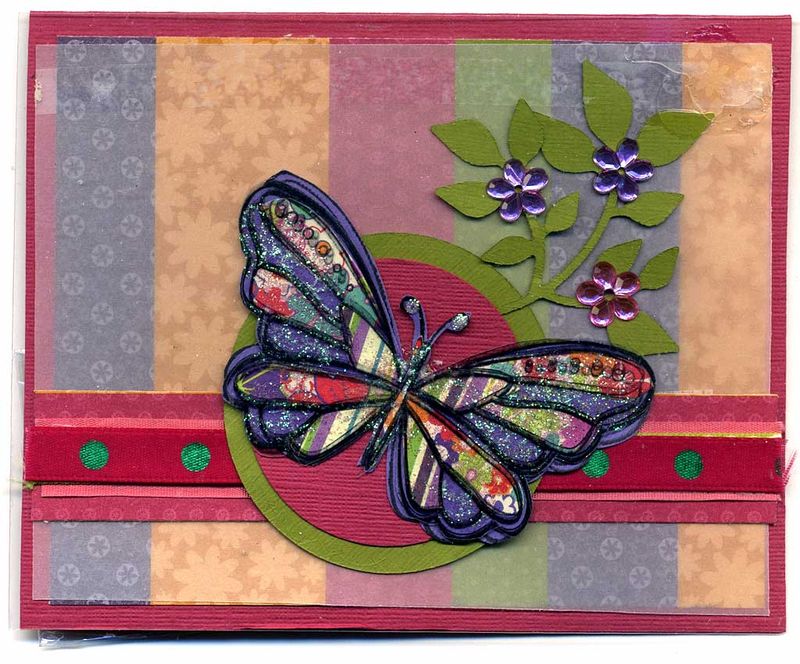 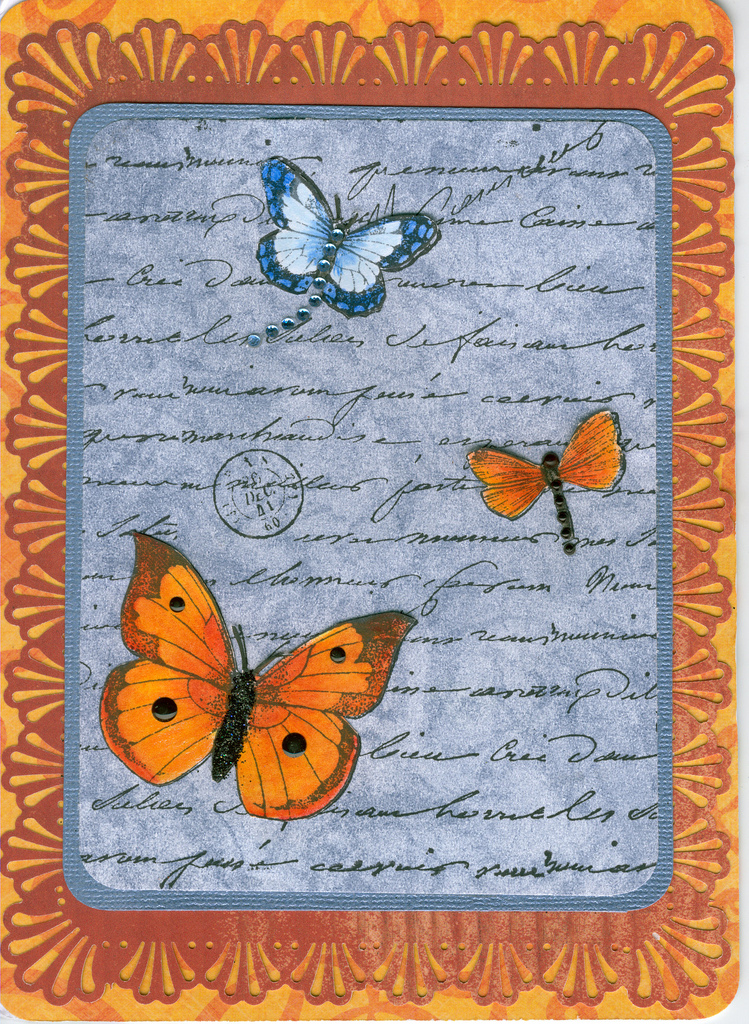 Joy in Indiana sent Hannah in Missouri a card and some goodies: 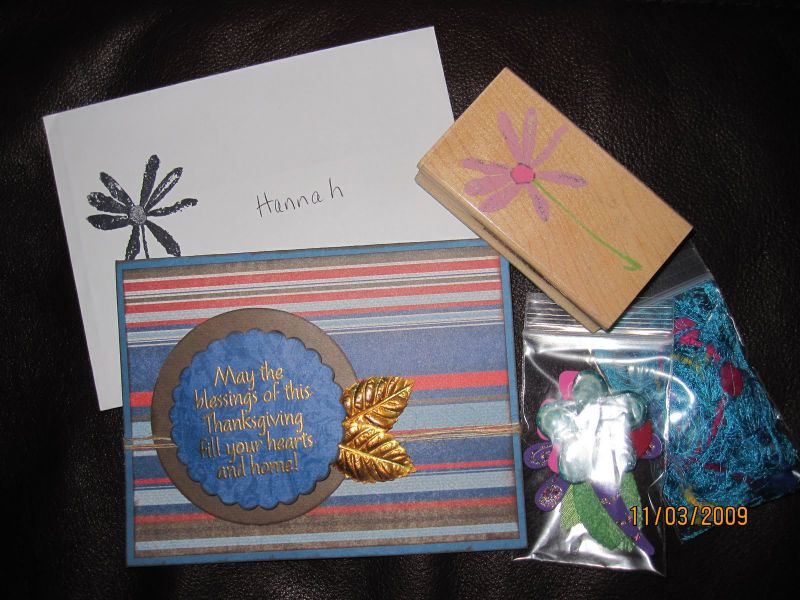 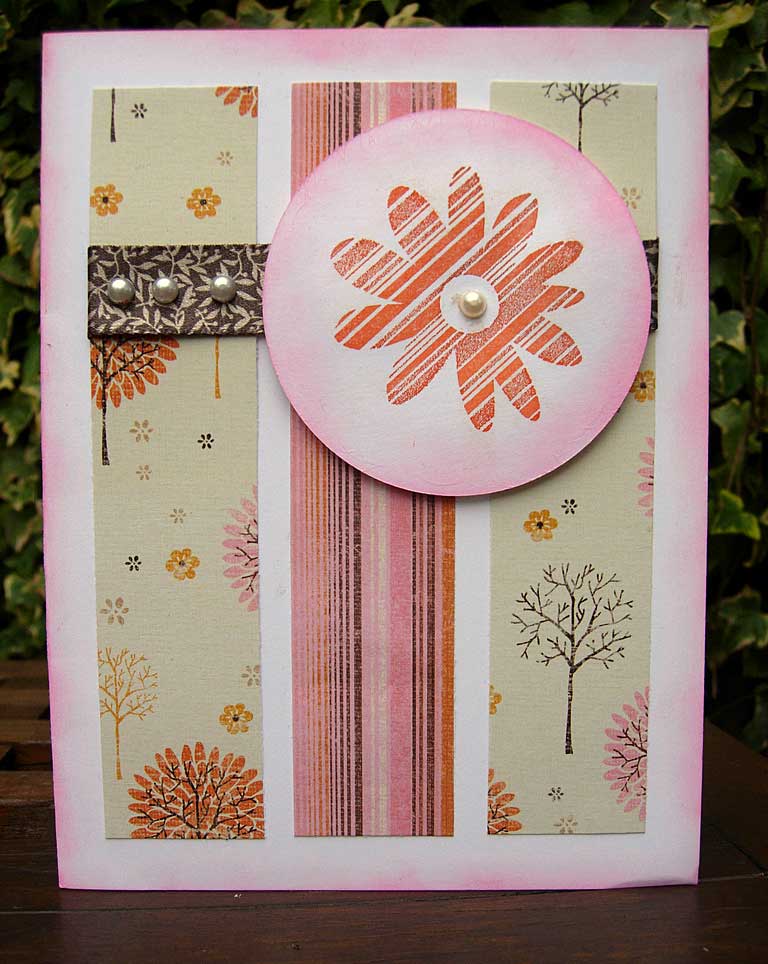 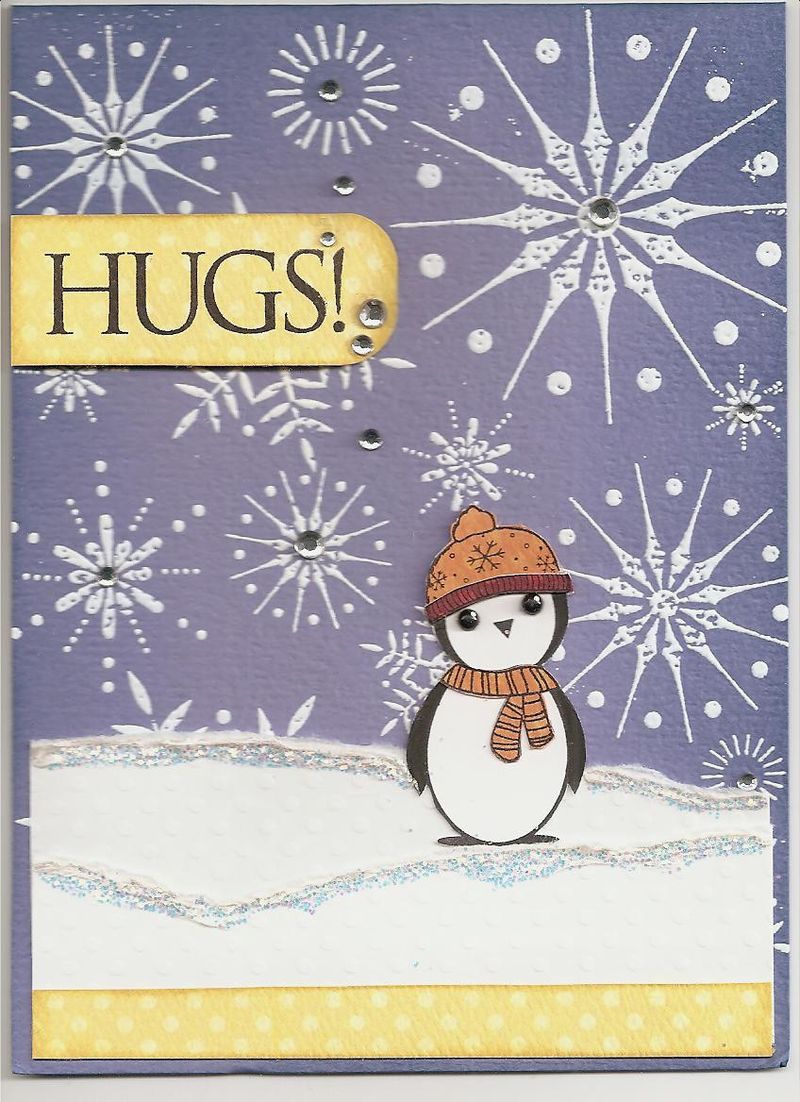 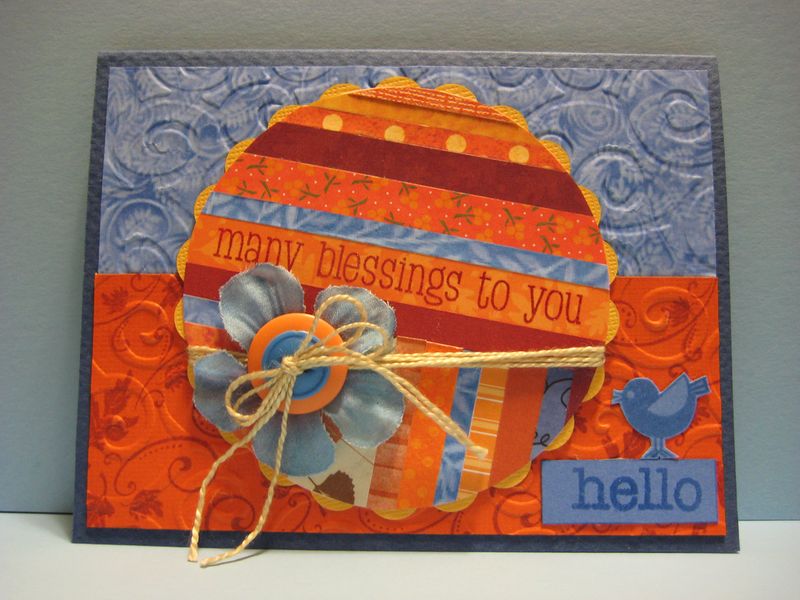 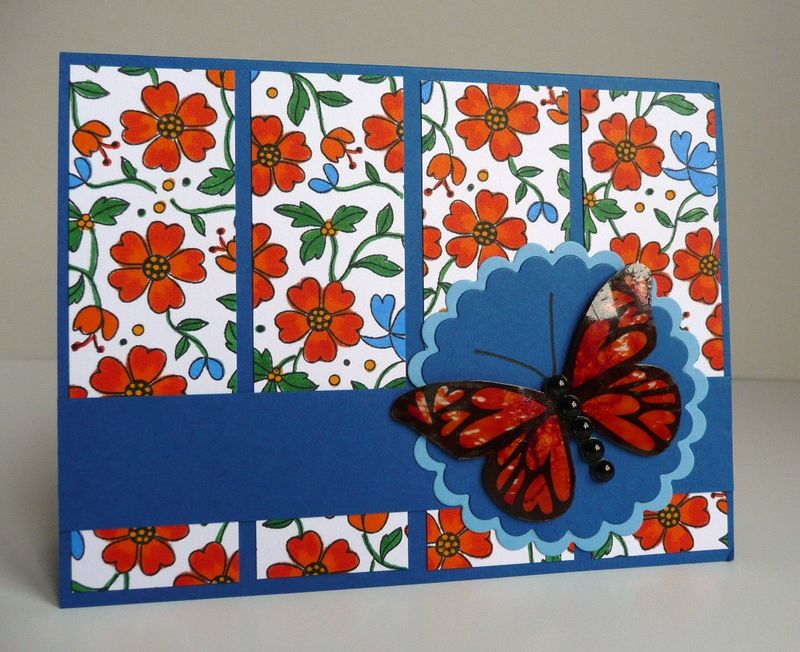 Sue in Ontario, Canada, sent Deborah (me) in Indiana: 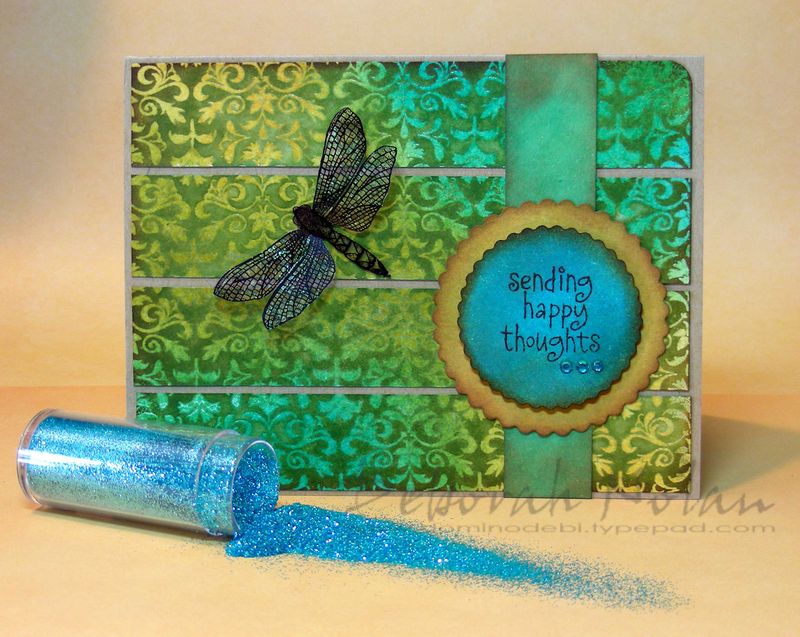 And it arrived in this totally cool envelope she made out of a calendar page!

(I very carefully removed the address label so you could see it in all its beauty!) 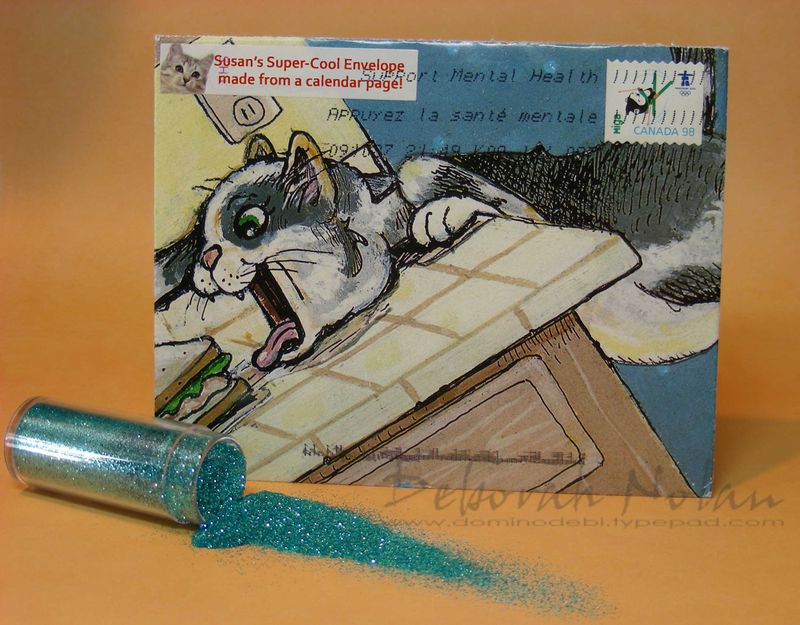 From Indiana, I sent to Paula in Australia: 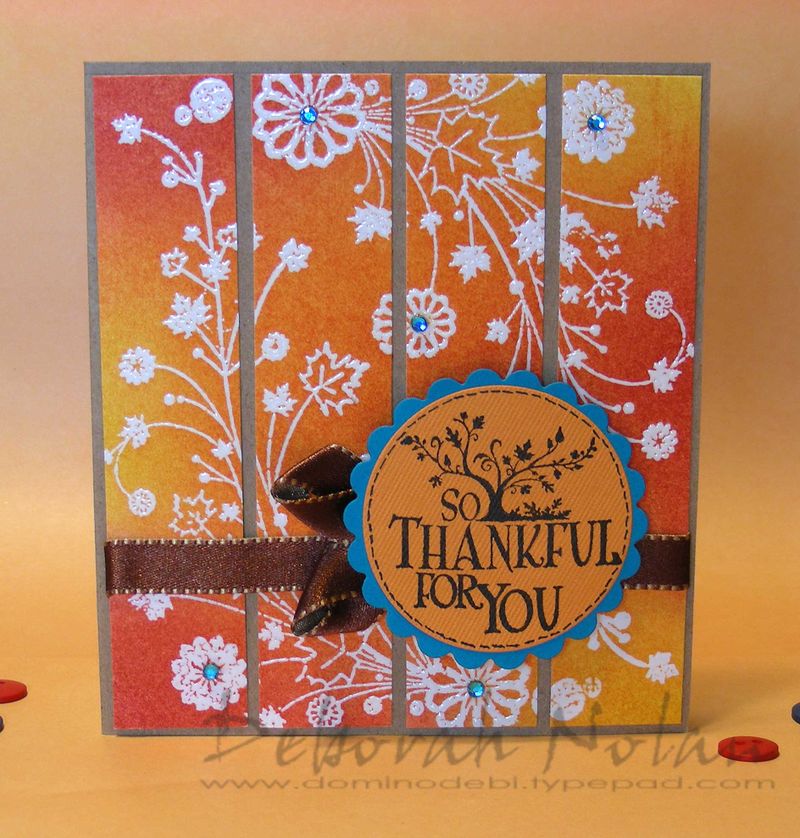 And there you have it!!!  I haven't received everybody's photos, but as soon as I do, I'll post them here, so be sure to check back so you don't miss out on all that Crafty Goodness!

Again, we had such a good time - thank you to all the ladies who participated!!!

Check back here on Tuesday, November 24th, when you can sign up for the December Card Chain Challenge. I recommend trying it out - the reward is definitely worth the effort!

Lots of fun and beautiful cards! Thanks for hosting, Deborah!

Fantastic cards by everyone! Thanks for organizing the card chain Deborah!

It is SUCH a joy to go out to the mailbox and find a card (from Norway!)- talk about a day brightener! I highly recommend this fun to everyone; I'll be playing again next time. Thanks so much, Deborah, for organizing this.

THANK YOU Deborah for organising these... they really are such fun. I'm keen to try again. I just love getting these choice cards in my mail.

It is amazing to see all these cards!! I have gotten so much pleasure from the cards I have received! Thanks, Deborah for setting this up! Can I play again??

ALL THE CARDS are GORGEOUS! Such talented ladies from all over the world ...
Thank you Debbie for all the work you put into setting up these exchanges; I'm definitely playing December, if you'll let me.
Warm Florida wishes!

I agree with all of you that it is joy to pull a beautiful hand-made card out of a mailbox that yields nothing but bills and advertisements!

And as to whether you can play again (question posed by Judy)...

You bet your bippy you can!

(I have no idea what bippies are - but they're apparently very popular in southern Indiana - given that everybody seems to have one.....)

Thanks Deborah!! Once again, I had lots of fun participating, and I loved seeing everybody's creations in the end!!

wow! this is too fun Deborah!!!! LOOOOOOOOOVE seeing all the cards that connected so many people all over the world!!! YOU are a genius to come up with this idea!!!! I'll make sure to be here at the 24th!!!

Wow! That was an awesome ride! Loved seeing the exchanges as it went 'round the world! Amazing--you ARE Mighty Mouse! Hope to play in the next round--thanks for having it again!

It's brilliant to see all the wonderful cards created for October's CCC. Thanks again Deborah for organizing all the fun for us!

Wow! That was totally AWESOME! What fun...I am definitely glad I joined in the fun. I am looking at the beautiful card I received right now as I type this...I will always treasure it.

Thanks again for organizing this, Deborah...it has really been a pleasure...both sending, receiving and now viewing the cards!

Just Saw this....So many fun cards!!! thanks for doing this Deborah...it was great FUN!!!

Deborah!! Thank you so much for all the fun and the great effort you put into this challenge I had lots of fun participating, and I loved seeing everybody's creations!