Given that I am forever running behind, it should come as no surprise to anyone that I'm blogging about a handmade Christmas tree ornament in January, right? The reason I am blogging about it so late, and part of the reason I had to take a brief hiatus from blogging, is directly attributable to this very same ornament, privately known as "The Naughty Little Ornament from Hell" or "That $#%! Thing" (depending on my level of frustration).

But I'll just call it Vivi to make things easy (and because that just happens to be the name of the stamp itself). I had just received Vivi in her rubber form and was dying to take her out for a spin. I conceived the idea of Vivi in ornament form as a result of Hannah's little ATC-type ornament exchange and my needing to make something for the December CCC.

I had a fabulous time stamping Vivi and then coloring her with Copics, experimenting with color combos, etc. Although I still have troubles with coloring and shading hair, Vivi looked pretty good, and she just fit into a circle cut from a Nestie. Oh, it was paper Nirvana!

I was so pleased with my results, that I had a sudden flash of inspiration! Why not just make a BUNCH of her? I wanted to send some cards to my card-making buddies at the Hero Arts Flickr group. I was having so much fun coloring with my Copics that I decided I could make the required 30 ornaments with next to no pain.

And, indeed, I experienced an auspicious start. I had set up an assembly line of tasks, and I was speeding through each step with grace and aplomb! Things were going great! All hail the conquering heroine!!!

I had a Good Intention.

(Now I can't be certain of it, but I suspect this is what happened when Dr. Frankenstein decided to inject some Action into his life-sized Action Figure.)

I decided to reinforce Vivi because she seemed too flimsy to perform her duties, being just a thin piece of paper and all. (Yes, I know. All she had to do was hang on a tree - how strenuous could it be?)

Little did I know, but I had just commenced on a one-way journey into the bowels of Hell... (neatly paved with my own Good Intentions, of course).

My plan was simple, BRILLIANT even. I would cut circles of chipboard with my Nestie, and I would glue Vivi on one side and a nice circle of snowflake-embossed blue cardstock on the other, sandwiching the ribbon between the layers.

Because my Cuttlebug and Nestie weren't interested in cutting my Tim Holtz chipboard. Or my Tim Holtz Grungeboard. They grudgingly cut my Tim Holtz Grunge Paper, but that particular material lacked the unyielding stiffness I craved. Cardboard didn't work in the machine either. (Besides, it was too thick - remember, I had to keep my ornaments thin as well as stiff, you know!)

And then... lo! An idea wafted down from the heavens as I stood in the middle of Michael's: I would use fun foam! I knew my Nestie would cut through it, and it was thick enough to still provide stability without being too thick for mailing.

I want you to know that I was very, very happy with my solution that night as I cut and embossed, glued and assembled. But I wasn't quite happy with the result. Vivi's edges were bare, so you could see the colored fun foam core, and she was just too cute to be surrounded by raggedy edges. Enter the round cording - it would wrap neatly around the circumference AND it was just thick enough to cover the edge of fun foam. Glue was required to make the cord adhere, of course, and it got a little dicey at times, but I persevered, by jingo! And it was just what was needed. Now Vivi looked good - better than good, even - she was smokin'!

So I did all 30 Vivi's that night, finally falling into bed exhausted at about 3:00 a.m. I slept the sleep of the righteous for I had conquered my problem, made my ornaments, and would be mailing them in a timely manner.

I awoke the next day and skipped out to the dining room to slide the 30 Vivi's into the cards I'd made to "frame" them. I was so lighthearted, I bellowed the 12 Days of Christmas with a zeal usually found only in small children and drunk Shriners.

During the night that mean, rotten, nasty, ungrateful, ill-mannered, scum-of-the-earth fun foam had rebelled. It didn't like the Diamond Glaze that adhered it to the stamped front and the embossed back. The result being that my once-flat ornaments were now warped and buckled. They looked as grotesque and disfigured as Quasimodo.

I will not dwell on the language that proceeded to fly from my mouth as I attempted to rehabilitate 30 puckered little Vivi's.

Diamond Glaze is an unforgiving adhesive - I mean, it sticks - like, FOR-FLIPPIN'-EVER. The fun foam had no chance against that level of commitment, so when I attempted to peel the ornament's face from the core, chunks of the core came with it. Which ruined the stamped image because it needed to be completely flush and flat against its new core. And when I was able to peel off the face sans fun foam, the paper itself stretched and created a level of warpiness that made it unfit for rehab. And then there was the whole issue of pulling the cording off from around the edges....

Oh, it was harrowing! I was surrounded by dead and dying Vivi's - and not a drop of morphine in the house! (And I could have really used some.)

In the end, I found that some Vivi fronts and backs could be saved by bonding them to very thin pasteboard - or whatever you call that stuff they use for cereal boxes, etc. I had to do each front and each back separately, (that's 60 - count 'em: 60! - circles) so now all of our Kleenex is stuffed in ziplock baggies - as are the Cheerios, Saltines, laundry detergent, and a host of other items. (Luckily, there was an accommodating beer case. Otherwise, the Bisquik, Hamburger Helper, and Mac'n'Cheese would have found themselves homeless, too.)

I never came up with a different solution for the core, so I was determined to make that miserable fun foam bend to my will! I was the one with a brain and opposable thumbs, dammit - no lousy, synthetic inanimate object was going to best me!!!

Upon salvaging the fronts and backs, I discovered that we had a massive adhesive issue - as in, nothing wanted to stay stuck together. The only way to get a true bond and also correct the warping was to run everybody - the cardboard-reinforced front, the core, and the the cardboard-reinforced back - through the Cuttlebug. After much experimenting with such a thick sandwich, I finally found the perfect combination of plates and shims to flatten the thing without destroying my machine.  Unfortunately, however, this tactic pretty much flattened the embossed snowflakes on the back side along with everything else. But, hey, I know when to pick my battles, so I let that one go.

The cording was a total washout, so I had to cut new ones and reattach. Eighteen of the Vivi images, like the cords, could not be salvaged and were cremated in the sink. They had to be redone, too.

All of this took a lot of time.

Which is why Vivi the Christmas Elf is arriving in mid-January.

And the moral of the story is this:

If you feel one of those Good Intentions coming on, squash it. Squash it like a bug! 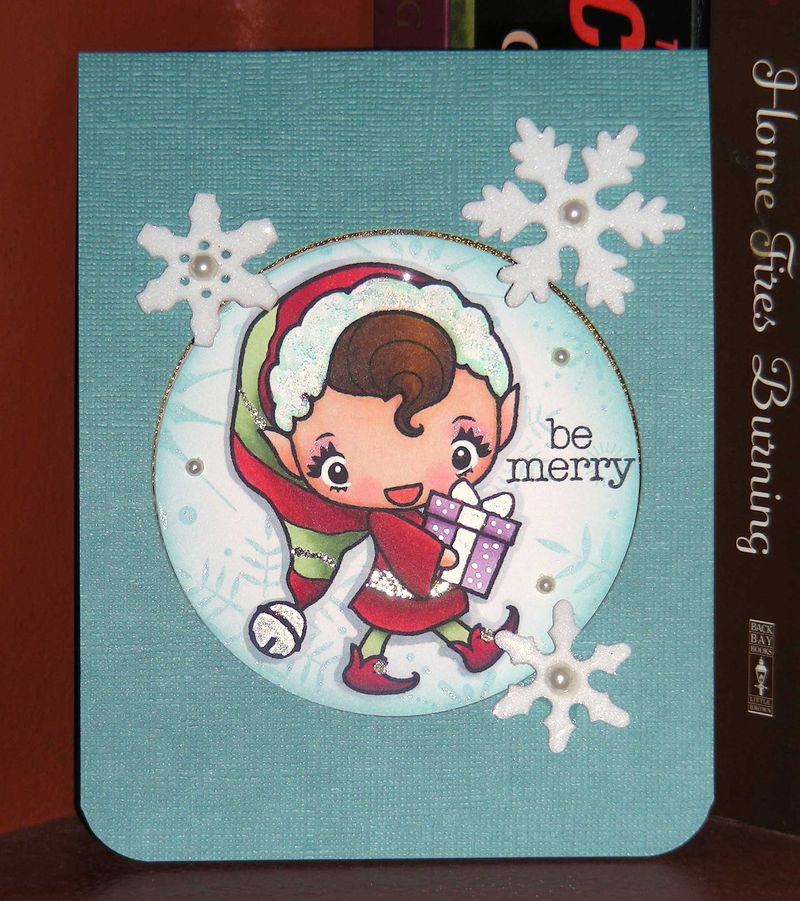 Seriously. How could anything this cute go so wrong?!

Vivi is made by The Greeting Farm.

Sounds like one of my own misadventures. That pesky creature, Good Intention, has taken up permanent residence in my studio! So glad you snatched Vivi out of its hold. She's precious!

I'm laughing out loud here.... this is hilarious! You should take all your journaling blog entries and make them into a little book, calling it the Journal of a Card Maker or something funnier!
I do really feel for you Deborah but I'm so glad you can react light-hearted towards it! Thanks for sharing!

Sorry I didn't comment on Vivi - she is very cute!

Love the ornament and the story is too funny... Because you know we all have matching ones... Luckily mine only occur on groups of one rather than 30!!!! LOL

Oh my!........ What a story! I think I'd drop the whole thing somewhere in the middle or even before that! Nonetheless, this little lady is so cute!

oh... I didn't know the beautiful Vivi ornament in my hand has caused you so much time and energy to make, Deborah!! I really enjoyed reading your post though, so fun and you again treated your misery with such humor and that's why I love you!!! =) Now the gorgeous Vivi ornament from Deborah will be our family heirloom and will be passed on forever and ever... =)

Deborah, this ornament is gorgeous, and even more so now that I know its history! I'm so glad you didn't give up on Vivi! The details on Vivi are amazing!

I'm so happy that you persevered! Thanks for sharing your story; I'll treasure that cute little elf forever, I promise.

I wasn`t really awake - till now!! Just can`t stop giggling, your story is hilarious! And I am admiring you so much, I would have thrown everything into the trash and never layed a hand on it again! Can`t bow low enough before you!

Deborah.... little did I know that beautiful ornament was such a troublesome little beastie.... I admired it everyday up to till 6 Jan when we took the tree down...and it is now safely stacked away till Christmas again... I will have quite a different view of it when it comes out next.... Loved your story and am so glad you persevered and I got Vivi in all her glory. Thank you...

I'm glad everything worked out in the end - there's nothing worse than not being able to walk away from a failing project because you've just put too much effort and time and energy into it!
I LOVE reading your blog so much! I love the way you tell stories... Thanks for sharing your latest adventure with us :)

Vivi looks so adorable and cute - hard to imagine she could cause such hardship! Loved reading about the process! I would definitely have given up but fair play to you for persevering - adorable ornament.

Sorry she was so much work and trouble...the end result is amazing and she will be up in my stamp room all year!! Love her.....

You made my day! I laughed til the tears ran - sorry to be laughing at your misadventure with Vivi, but you are gifted storyteller. I think there must be a scrap/stamp magazine that would publish your escapades - but I think there is definitely a book in you too!

I will take VERY good card of my Vivi. I love her. Thank you for persevering, I am honoured. And you are hilarious.

Deborah, I will know appreciate my ornament even more (don't think that's possible!) after hearing this tale!! Bless you for persevering and seeing to it that the amazIng ornaments were sent out! Hugs!!