Wednesday Wonder - of a Different Type

So we don't have a Wednesday Wonder because I forgot to send out the interviews in a timely manner. That's the bad news. But the good news is that I now have several artists lined up, have sent them the proper paperwork, and we'll be back in business next week.

And I thought I'd take this time to thank everyone for being so incredibly nice and supportive with all their lovely comments. It means so much to me when people leave a note saying how much they enjoy reading my blog. As many of you may have noticed, I'm a frustrated writer at heart. And if I could figure out a way to get a regular writing gig, I would. Ah, if only I could be the Erma Bombeck of the early 21st century.... (And if any of you are saying, "Erma who?" you're up past your bedtime!) Well, we shall just have to see what we will see.

Being without a Wednesday Wonder doesn't mean that we're completely wonder-less, though. I keep trying to squeeze in an update on Spouse's painting, and then keep getting distracted. Plus, he kept sneaking in there and working on it without taking a photo first!  The wretch. How, I ask, am I supposed to document a work in progress when the artist is so stealthy?

But let's leave my whining and get to it, shall we?

Let's see... it all started with this sketch: 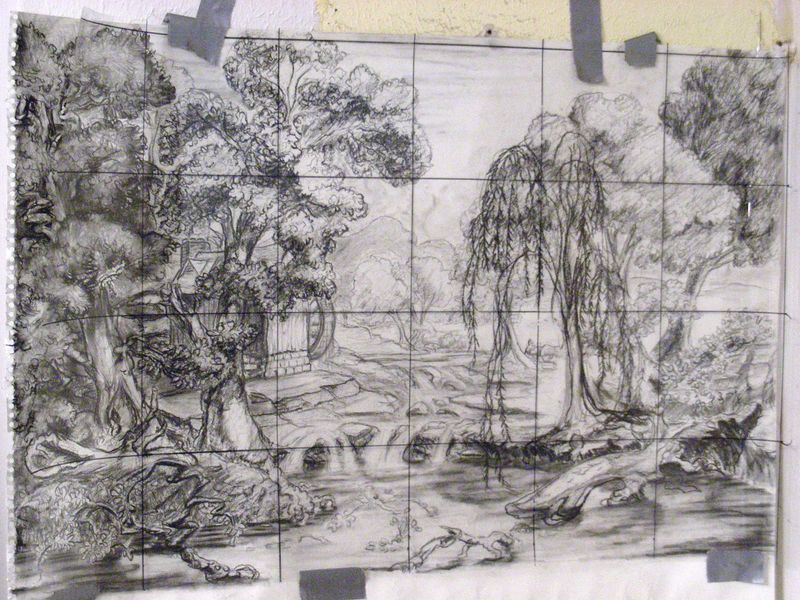 And then the first layer looked like this (you can see the grid marks here and there): 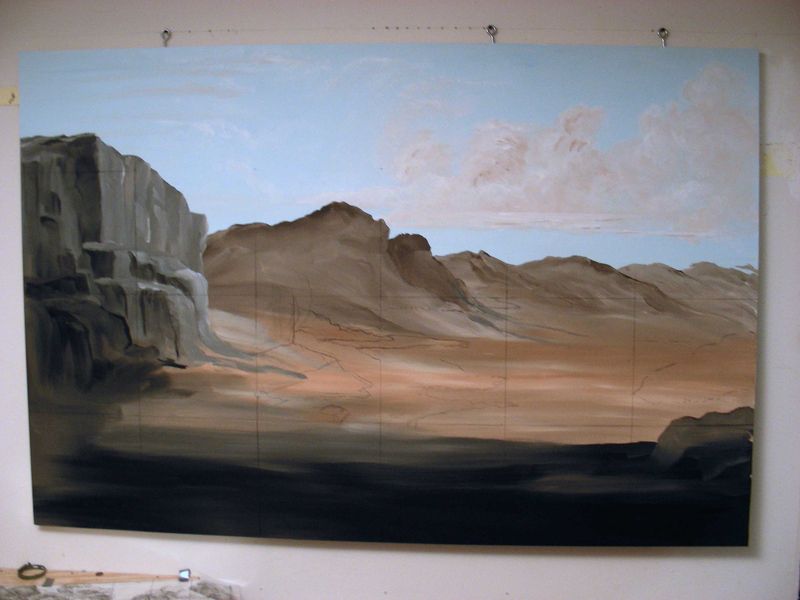 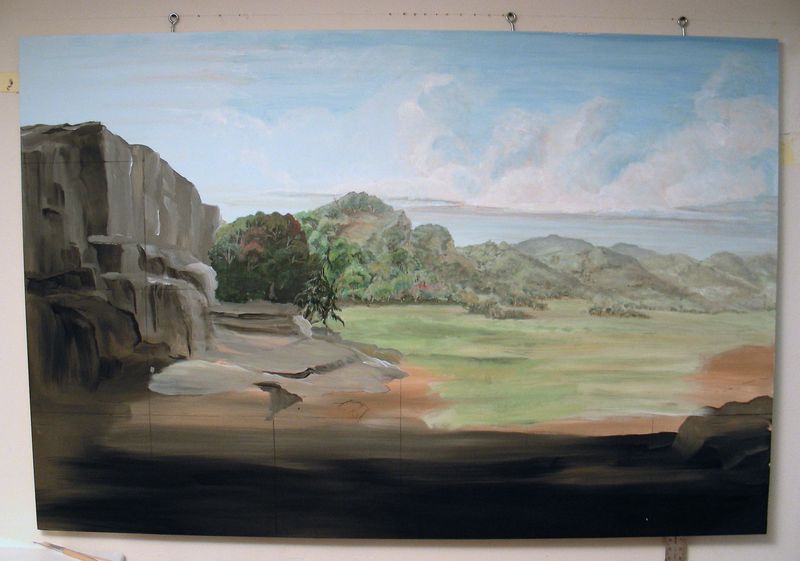 And that's where we left off, right?

Okay, so here's what it looked like at the start of one day shortly after the picture above: 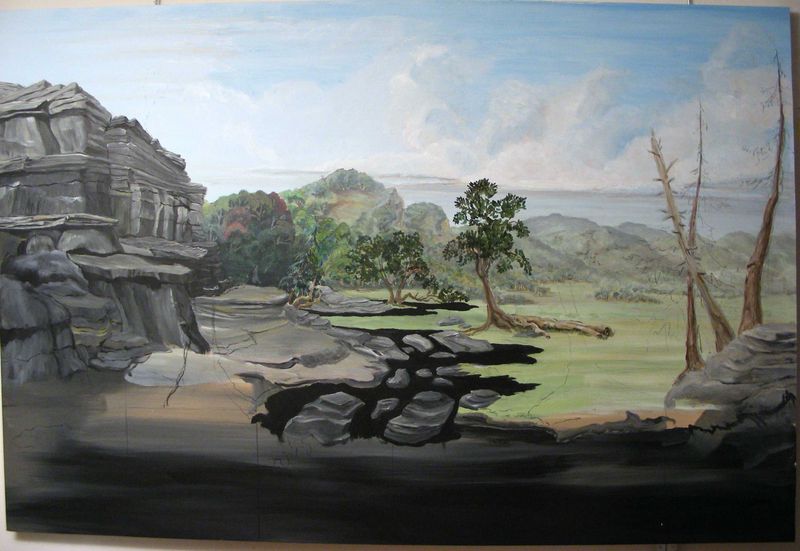 A little later in the day, he sketched in some trees: 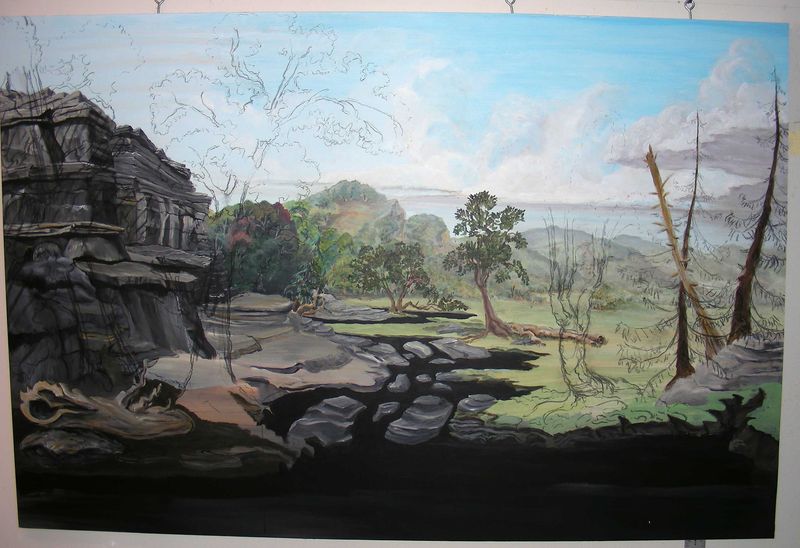 Then he painted the trees: 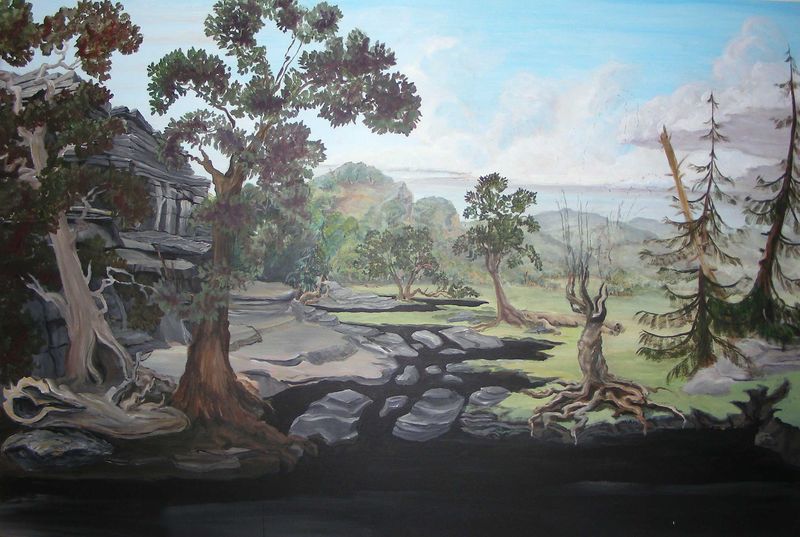 By the end of the day, it looked like this: Now I'm not likening Spouse to God, but when I get to see a photographic progression of a landscape like this, I get a giggly image of the Almighty during the Creation. I can see Him cocking his head to one side, being pleased with one stroke and then frowning at another. Which makes me wonder if He came up with anything that he later decided to scrap. For all I know, we could have ended up with beer for water and two heads had He been feeling rambunctious... three heads and castor oil if He'd been in a cranky mood.

Amazing! So much talent under the same roof!!!

Wow, you are one talented family!! This is amazing!
I loved watching Bob Ross a few years ago - "There are no mistakes, only happy little accidents!" It cracked me up! But I am trying to remember it every time I make "mistakes" on my cards ;)

wow! what a fabulous job...love seeing the progression. Talented family for sure!

WOW! This is spectacular! Love to see the progression of pics. You spouse is oh so talented!

Your hubby can be your Wednesday Wonder any time! Gosh that mural is stunning....absolutely stunning!

And you ARE the Erma Bombeck of the 21st century! We need an Erma again and you'd fill in nicely....

Wowzers - incredible painting. Thanks for the process photos - love them. And yes, you SHOULD be writing for a magazine / newspaper / stage show.

wow! amazing painting! so many talents in your family. who is the next? your cat? =)