I woke up this morning to find it had snowed another two inches while we slept. This, alone, wouldn't be too bad, but it didn't stop there. All day long it has snowed - fairly quickly in the morning and slowing down as the day passed - but never stopping.

I've been trapped inside, amusing myself occasionally by watching a fat little squirrel rifle through my garbage can. I decided to try to get some shots of him, but that meant I had to open the front door and stick my head and arm and camera out - which spooks squirrels, generally. However, I had some popcorn from yesterday's movie, so I tossed a few handfuls onto the porch and tried to entice him to eat some while I stood in the open door.

He was having none of it.

Oh, he came close, but the minute I got the door open far enough to stick my camera out, he scampered out of my sight lines.

The little cousin of a rat!

I did manage to capture him on the post, and then, later, I leaned out the dining room window and snapped him high up in the tree. My favorite, though, was his descent from the tree to retrieve the popcorn he dropped. The look on his face just goes to show that squirrels aren't exactly thrilled by falling snow when there's popcorn involved. 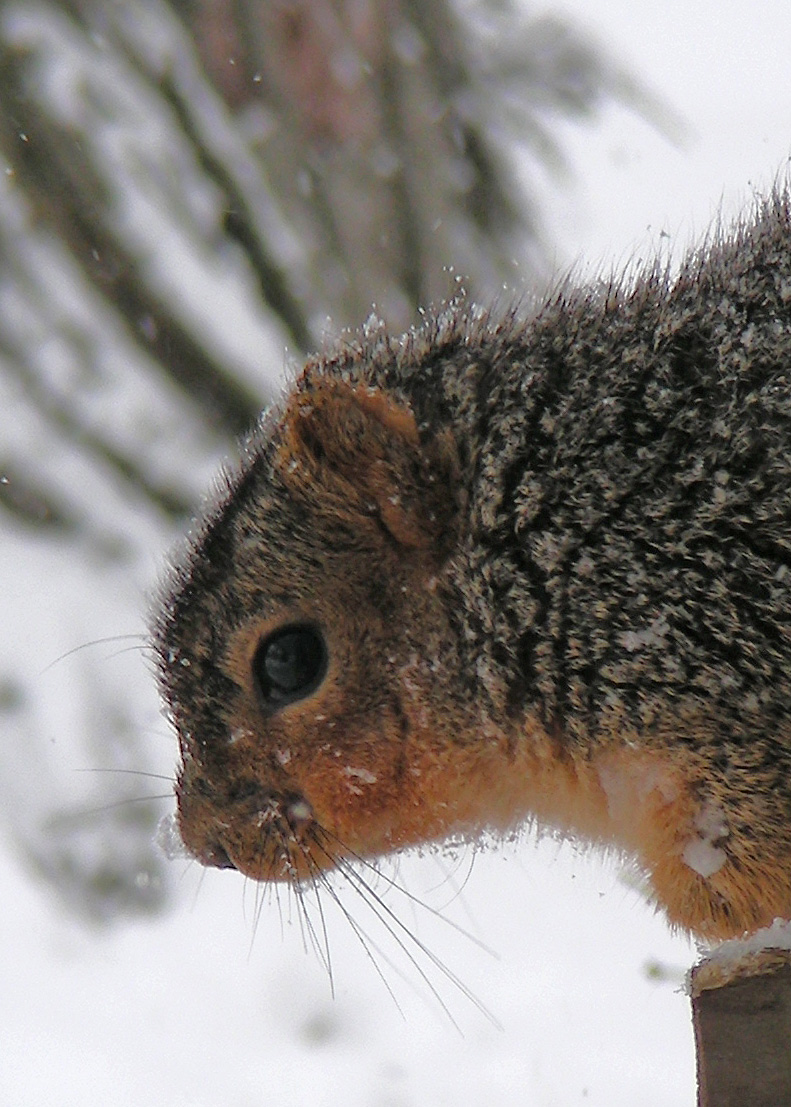 Cropped with adjusted exposure levels so his little face wasn't in shadows. 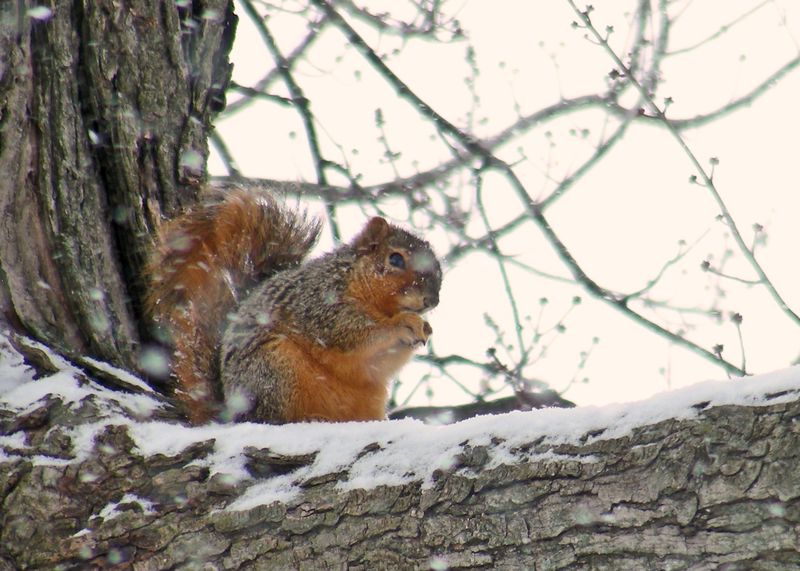 Cropped with adjusted exposure levels. This is why I love my camera's twisting body - I could never have gotten this shot with a stationary lens. 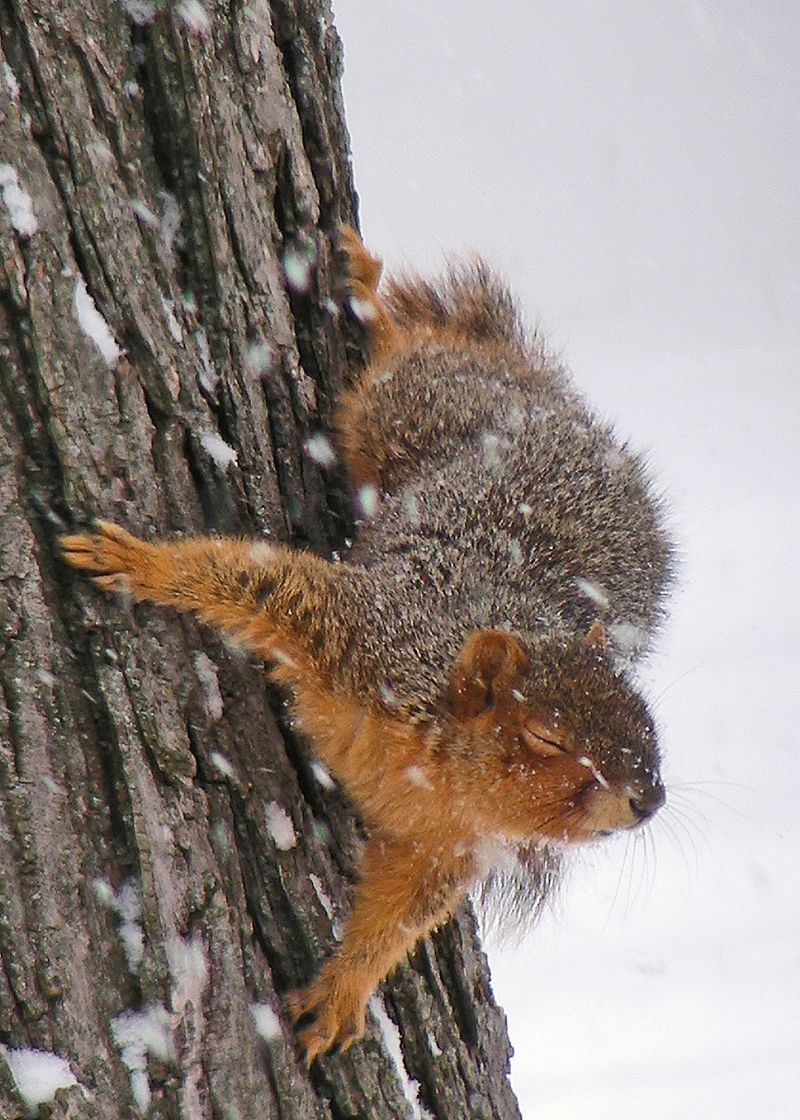 (You know, I don't think I've ever seen a squirrel with its eyes shut. Well... not one that was breathing, anyway. He looks like he just woke up and is groping for his coffee.)

I know there's only supposed to be one photo per day, but the Photo Police will just have to get over it.

Posted at 08:11 PM in Photography | Permalink

I love your squirrel - they are the funniest creatures! We have one who finds our birdseed by jumping up and down from the roof of our house. Really enjoying your daily photos - keep them coming!

wow! you got some great shots. we have a squirrel that seems to come along every day. our cat watches for him out the back door. he hand-picks (and steals!) my cherry tomatoes in summer and scampers around in winter digging up things he buried. love little squirrels...thanks for sharing!

He is so cute Deborah. We don't have squirrels here in NZ... but I did see some in Central Park in New York when we were there 12 years ago. My kids (then 12 and 10) thought they were the best thing ever and kept trying to catch them. Yours is very sweet

oh my! we love squirrels and those photos are some of the very best ones that we have seen! wow! beautiful shots, Deborah! That little guy is so "fluffy!" Hubby loves those photos so much, he asked me to send him this link. he is going to stash it away in his secret squirrel folder! =) thanks for sharing!!

Wow, so enjoyed this post of yours and the magnificent photos you took of the squirrel! That one of him/her with the eyes shut, you must post it somewhere where other people can see it too - it's so fun!

Love your photos of the adorable squirrel Deborah - you got really amazing shots!

Great photos and I love the pic with the squirrels eyes closed!

Hi, Deborah! Love your photos of the squirrel! We have a pesky squirrel that likes to shake all the bird seed out of the feeders to get to the 3 sunflower seeds inside. But I have to say, your red squirrels are a lot more robust than our scrawny little gray squirrels! :-)

I really laugh out loud every time I read your blog. You have a wonderful sense of humor. You brighten my day. Your photos are awesome. I also love your name :-).

Love, Love the pics of the squirrel- it really touched me cuz we saved a baby, that is now our pet, KiKi, I can't get pics like that when she is right in front of me! And she looks just like that! You did an awesome job!

Twana, Im glad you enjoyed the picture of the
squirrel. I got very lucky - and what luck didnt cover, Photoshop did!

Fab, Fab Photos! I love the one with his eyes closed.