Tutorial on Some Photo Fixes (DO try this at Home!)

Agata commented on an earlier post, asking me what I meant about cropping and correcting the exposure and color cast of a photo I took. Now the photo in question was truly unfortunate, but after I put it through a very few paces in Photoshop Elements 8.0, the thing makes me look like I'm an awesome photographer.

I feel it's my civic duty to sacrifice any sort of reputation I may have as a gifted photographer so that others may learn. (hee-hee!)

Don't ever say I never did anything for you!

For those of you who don't have Photoshop Elements, you can get similar photo editing programs online FOR FREE. Whereas they don't have all the options as PE 8, they'll make you very happy until you're ready to make the leap to a more extravagant program. Picasa is excellent.

Also, there are a ton of photo-editing tutorials out there - any google search will give you more hits than you'll know what to do with. Lisa Spangler was doing some nice ones on her blog, but she hasn't done any in awhile - probably because of her leg surgery and getting ready for the 2010 Hero Arts catalog release and CHA. Now that she's on the mend and the other things are over, she'll probably start again. So check her blog regularly. (Actually, I just went there to get the address for the link, and she's back at it - bonus for us!!!)

However, I already created this little tutorial, so I'm posting it, by cracky!

Okay, here's the photo in question. By several accounts, I am nothing short of brilliant for having captured this little rodent as he quivered on my my porch rail.

As much as I hate to correct this sort of thinking, I must confess that it is my photo editing software that deserves 90% of the glory here. I took the original photograph, yes, but let's see what you think about it in its original, un-edited state: 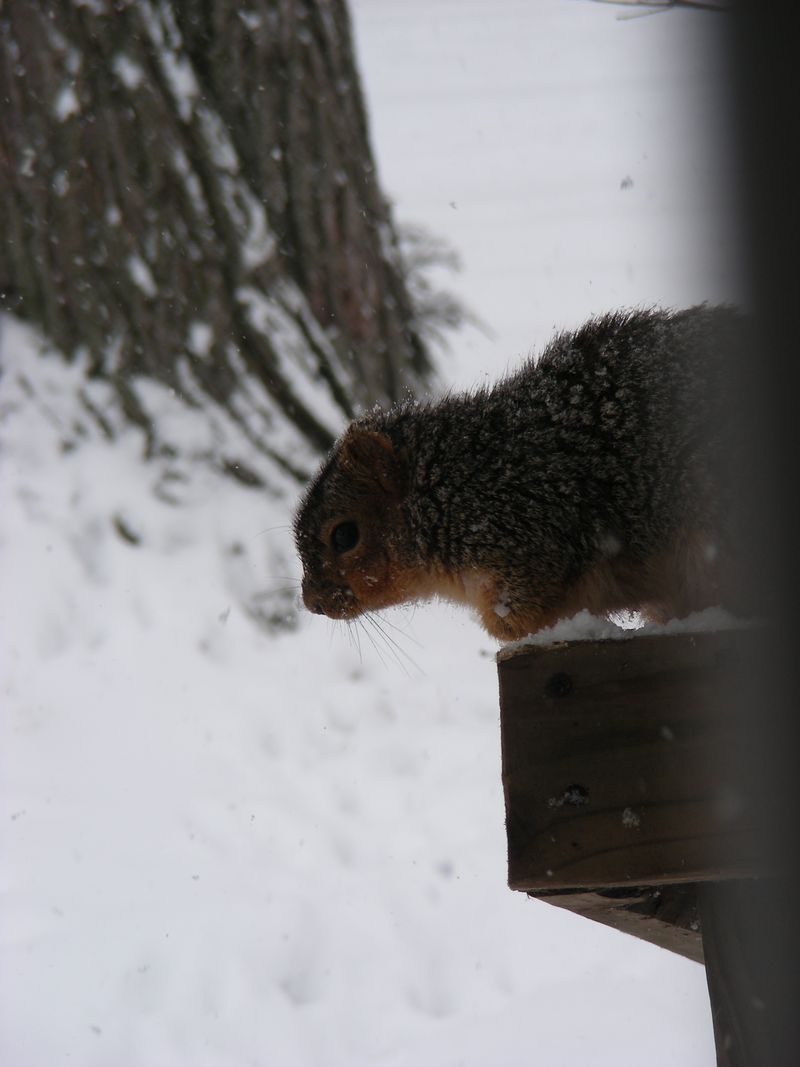 Whoa! What a disaster, eh?

To be fair it's all the squirrel's fault.

He refused to let me open the door so I could get a decent shot of him - that dark edge you see along the right side is an extreme close-up of the door's frame. The storm door is open less than 3", and I thrust as much of my camera through as I could, but it wasn't enough to get an unblemished shot of the squirrel. In my pre-PE days, this would have been a discarded picture, but now I have magic at my fingertips!

The first thing I did was crop the photo using the rule of thirds.

The rule of thirds says that "most designs can be made more interesting by visually dividing the page into thirds vertically and/or horizontally and placing the most important elements within those thirds."

For this picture, the first thing I had to do was determine how much of this picture was even usable - clearly the whole right edge had to go, right? So here it is without the offending right side: 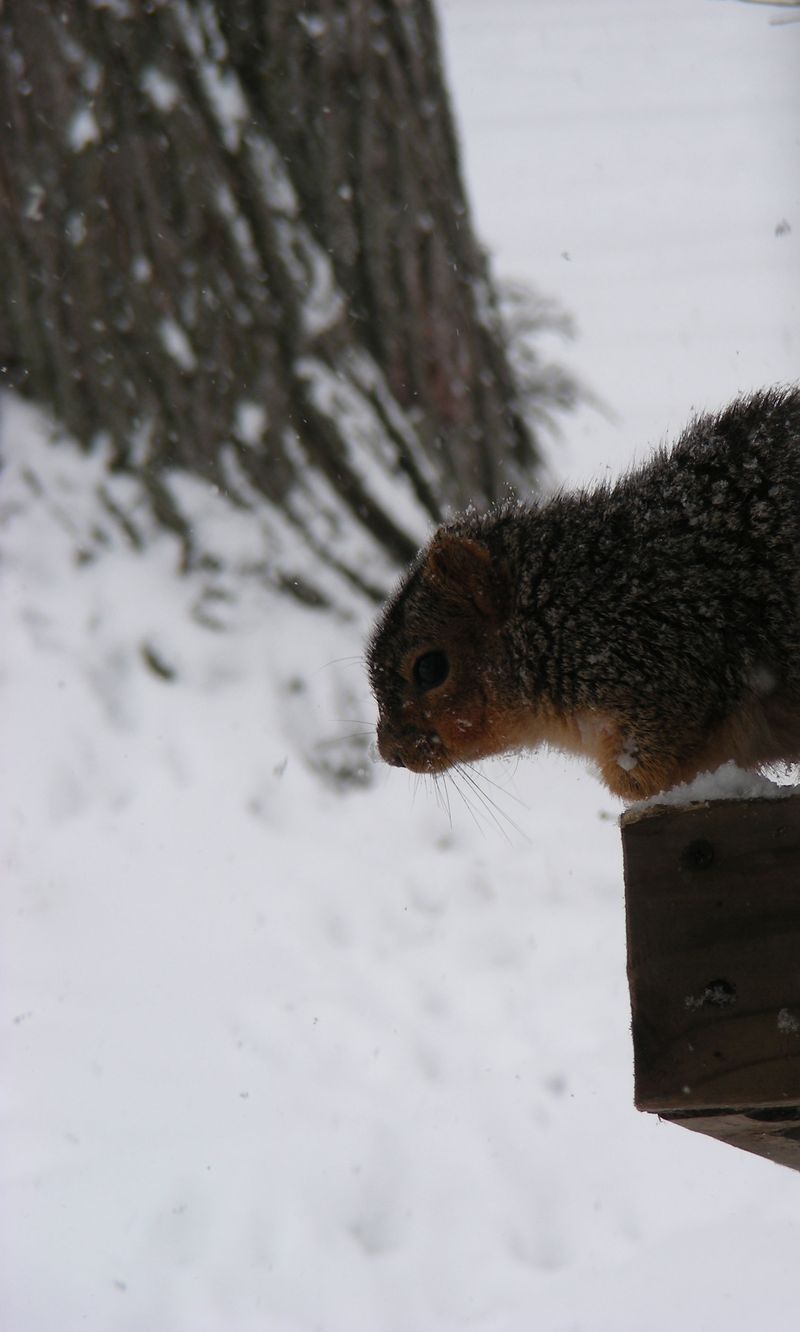 Now we need to crop the photo to get the best parts on those intersections - and we're going to do it by imagining a tic-tac-toe grid - with each square being the exact same size - lying over my picture. Here's what you might get at first: 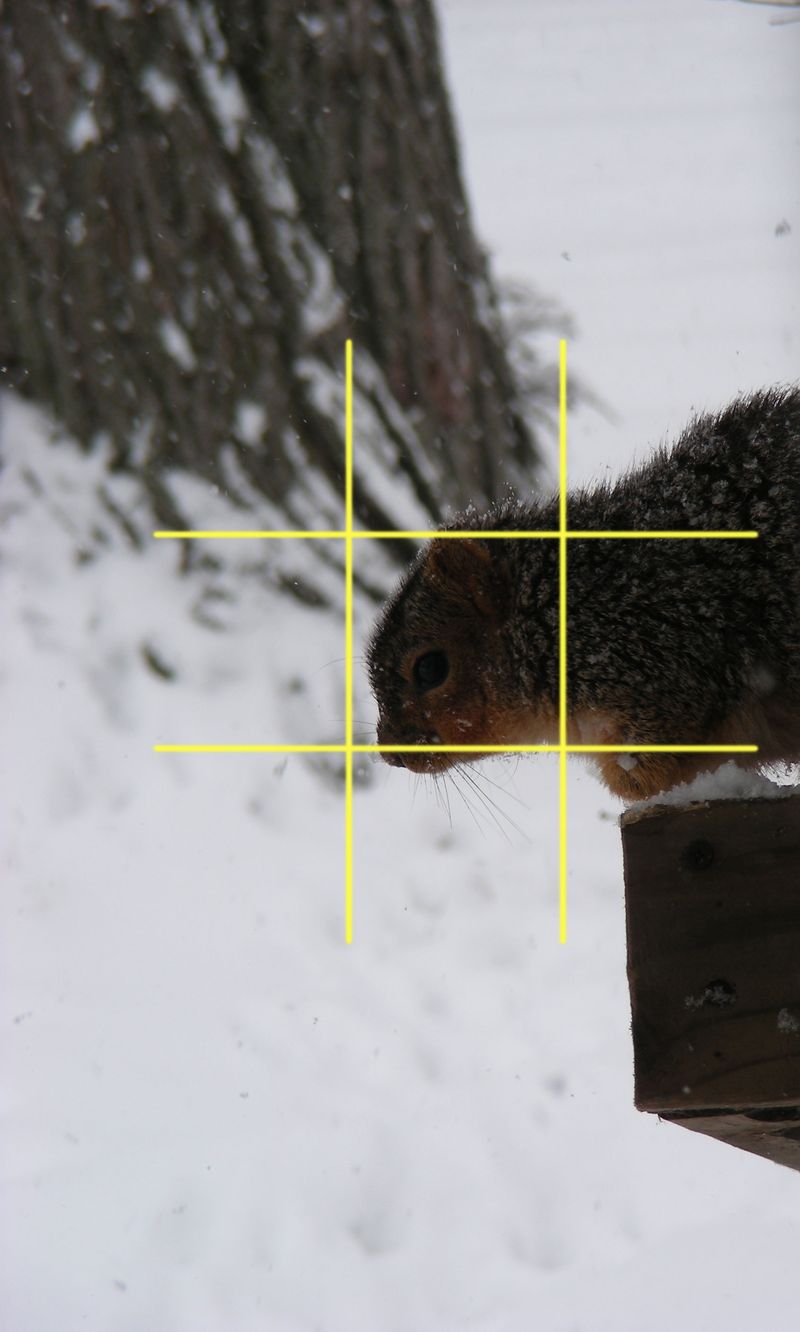 I didn't draw my grid over the whole picture, because the only part that's worth looking at is the squirrel. So I'm going to ditch all the rest and concentrate on zooming into the good stuff! Now the problem with this grid at present is that it's very close to being a perfect square - and photos are usually presented as rectangles: 4" x 6" or 5" x 7", etc. So I decided to play around with the crop tool in PE by restricting it to a 5" x 7" shape and then tried different placements - all while mentally imagining my now-elongated grid on top of the subject.

The squirrel's eye is the focal point of the photo, and I needed it to fall on one of those four intersections. After playing around with the crop, this was the best intersection placement.

I eventually ended up with this: 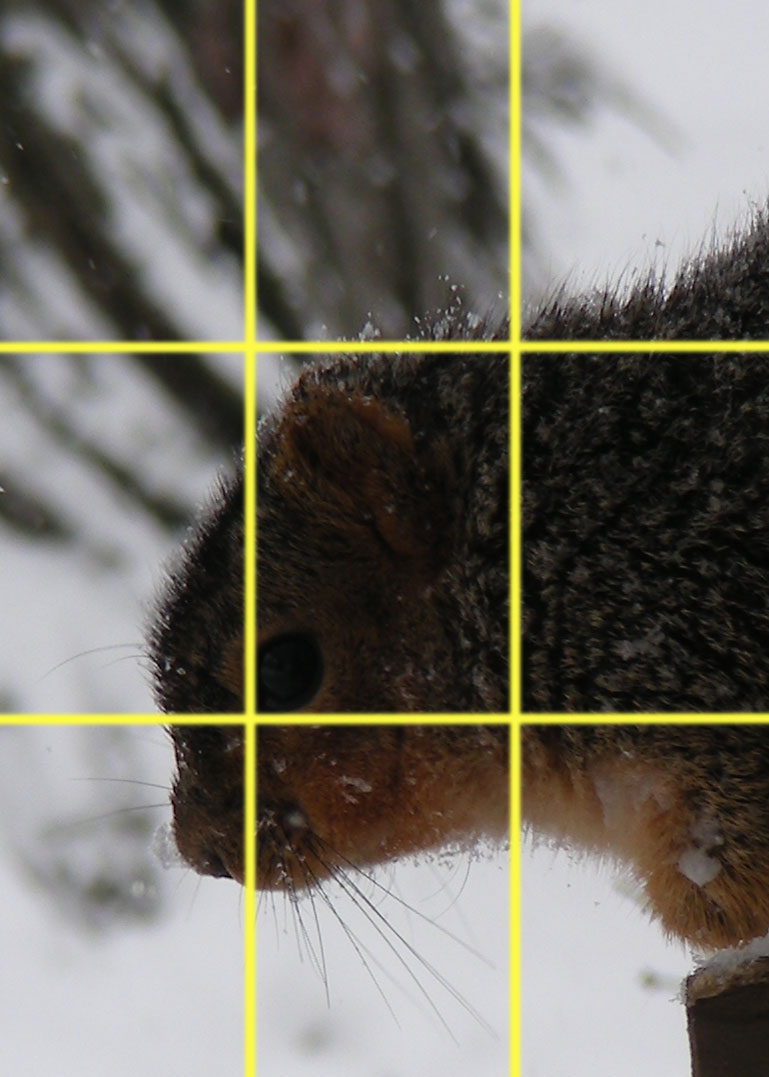 And here it is without the grid: 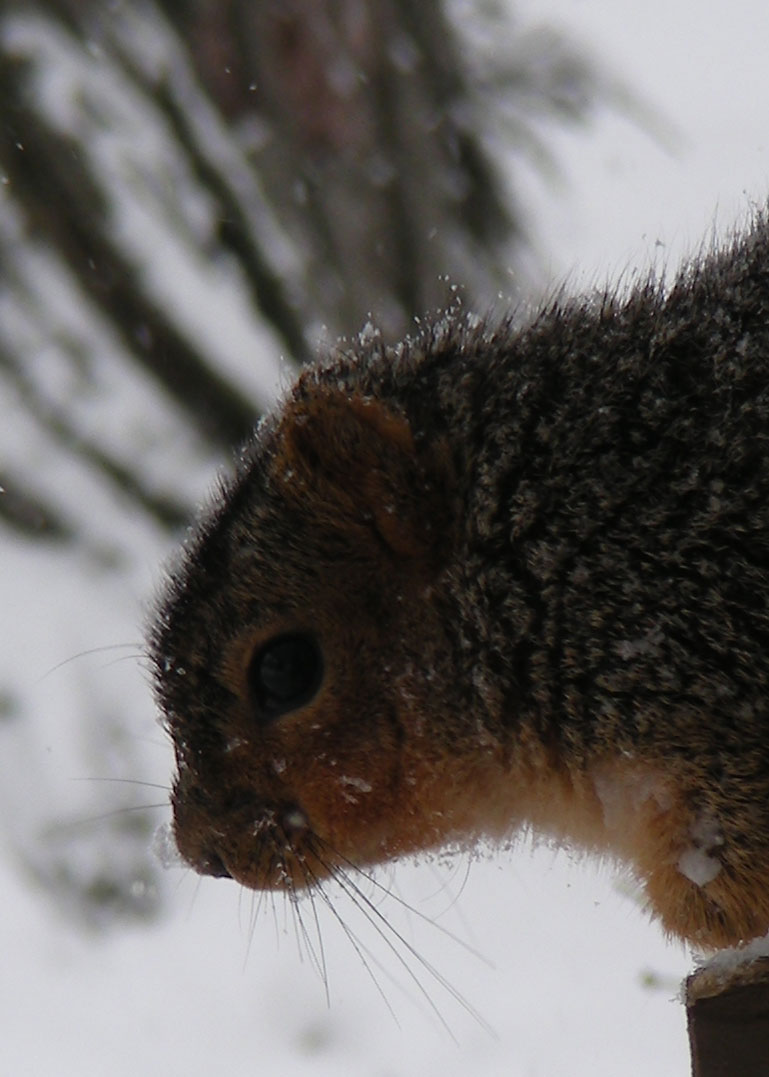 One thing I should note here is that my camera was on its highest quality setting, (meaning it was using as as many pixels as possible) and I took the picture using the MICRO function - which I had pushed to the max as I was at least 12' away from the squirrel. Had the camera been on a lower quality setting, the number of pixels would have been much smaller. The fewer the pixels, the more distorted the image becomes as you attempt to blow it up. A crop this tight requires a substantial amount of magnification and would have resulted in a muddy stew of pixels had I used a lower setting.

So now that we have our picture cropped to reveal it at its best, we need to do something about the exposure. We have a lot of glare off the white snow and the squirrel was in shadow. The flash wouldn't have helped matters because there was over six feet between me and my subject - so the light wouldn't have reached him. (Besides which, the squirrel would have raced off when the flash activated - leaving me with nothing but his blurry backside when the shutter finally released.)

There are a variety of ways to correct an exposure problem. The quickest way I know is to go to the toolbar and select  ENHANCE > ADJUST LIGHTING > LEVELS. This opens up a dialogue box and you push sliders around until you're happy with the result (you can see the changes as you play around). However, when you have a very stark contrast of dark to light - like we have here - pushing sliders in the LEVELS box ain't gonna cut it!

So now we try ENHANCE > ADJUST LIGHTING > SHADOWS/HIGHLIGHTS. This opens up a new dialogue box (with more slider) and simultaneously applies itself to your picture. As luck would have it, this is what it did to my picture before I even touched a single slider: 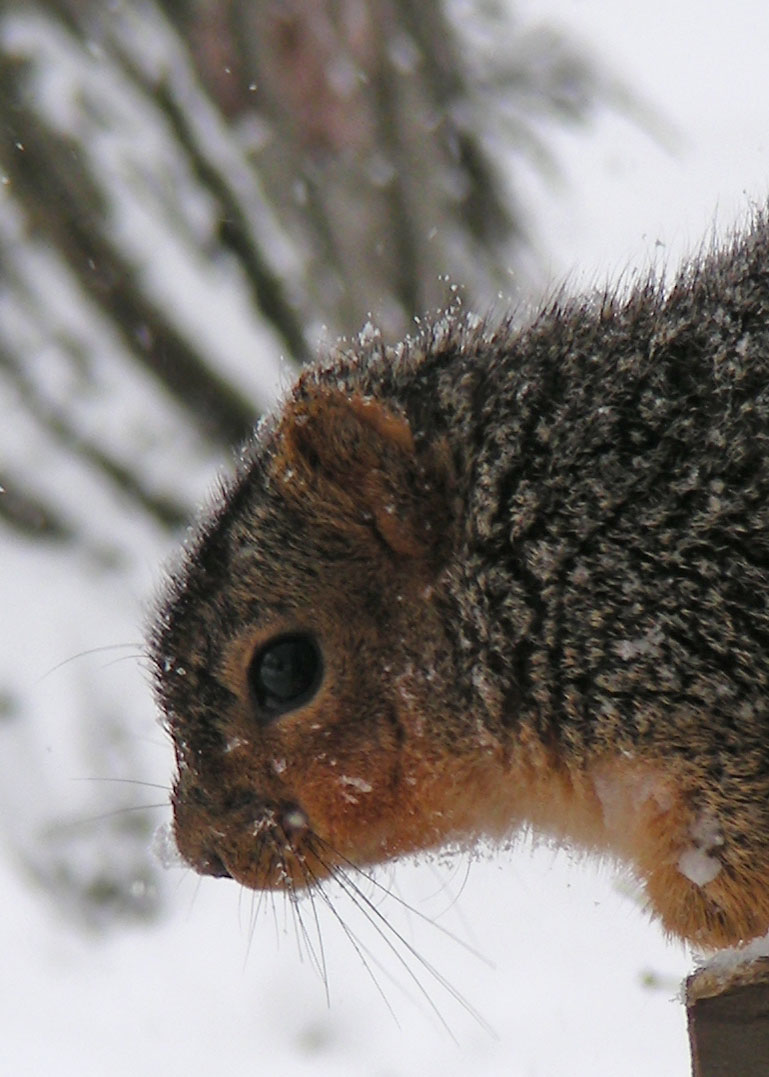 Just to give you an idea of how crazy you can go with this feature, here's a picture where I pushed all three sliders to 100%: 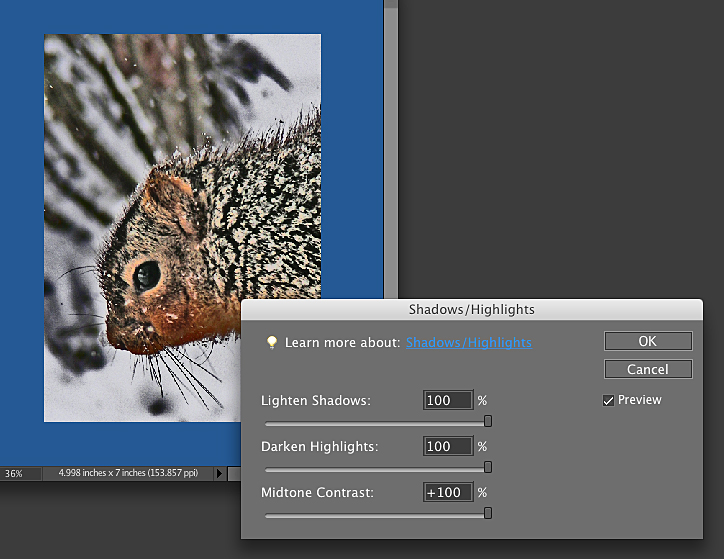 Of course, this is waaaay too extreme, but I wanted you to see how powerful this feature is. 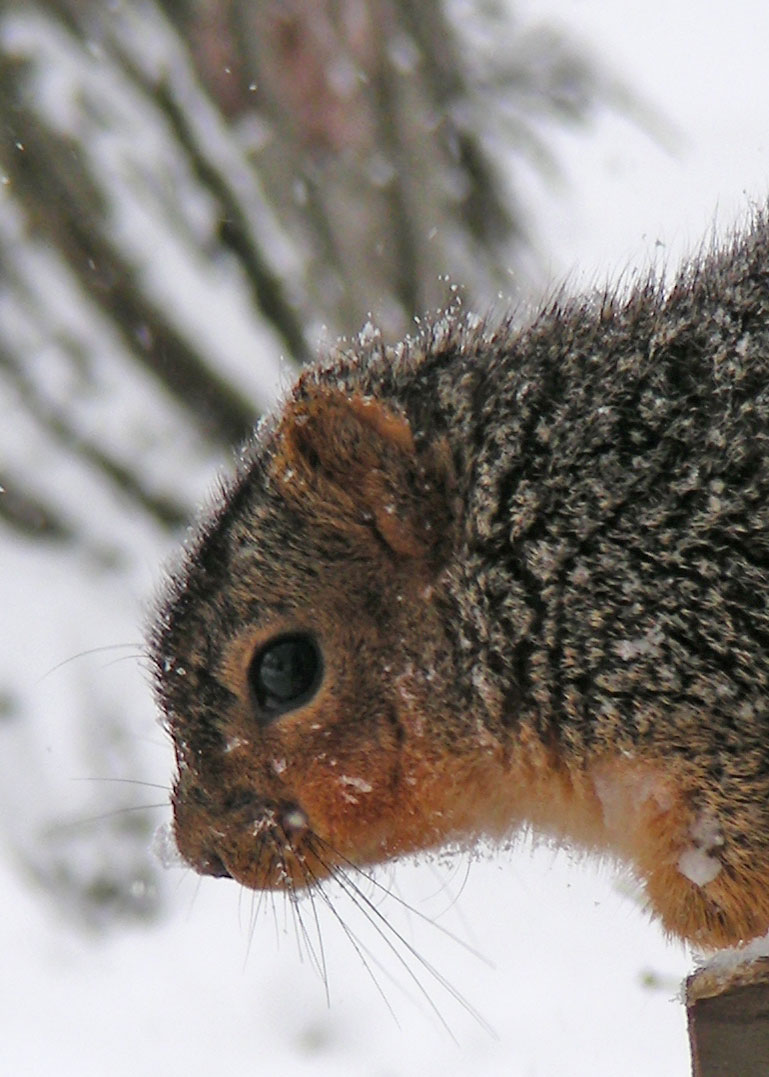 Now it's time to determine if we have any sort of color cast. A color cast is "a tint of a particular color, usually unwanted, which affects the whole of a photographic image evenly." I tend to see it manifest itself mainly as a dingy, yellow cast - kind of like what movie stars' teeth looked like BEFORE teeth whitening came along about ten years ago.

Again, this is a simple fix. ENHANCE > ADJUST COLOR > REMOVE COLOR CAST. Your cursor turns into a little eyedropper that you use to select a portion of your picture that is supposed to be white. It then re-samples the image to take away the color cast.

There actually wasn't that much of a color cast to be removed from my squirrel, but here's what it looked like after it was removed: 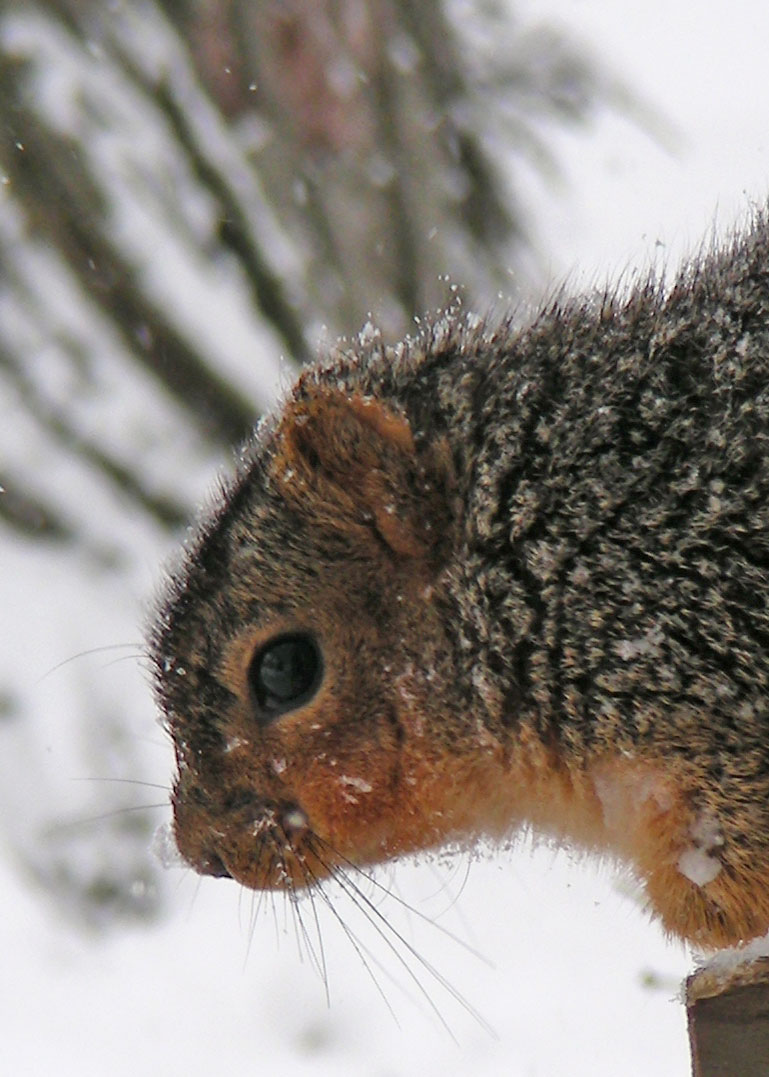 Okay - one last thing to do. I want to sharpen this image a little bit because it seems a wee bit blurry. I will use the Unsharp Mask. (I know that sounds totally backward, but it's a throwback to graphics before the dawn of computers.) You have to be careful with the Unsharp Mask - a little goes a loooooooooong way. This time the path is: ENHANCE > UNSHARP MASK. A dialogue box opens and you get to play with sliders again - as you move them around, you can see how it's affecting your picture. When you like what you see, you click on the OKAY button and you're good to go.

And here it is: 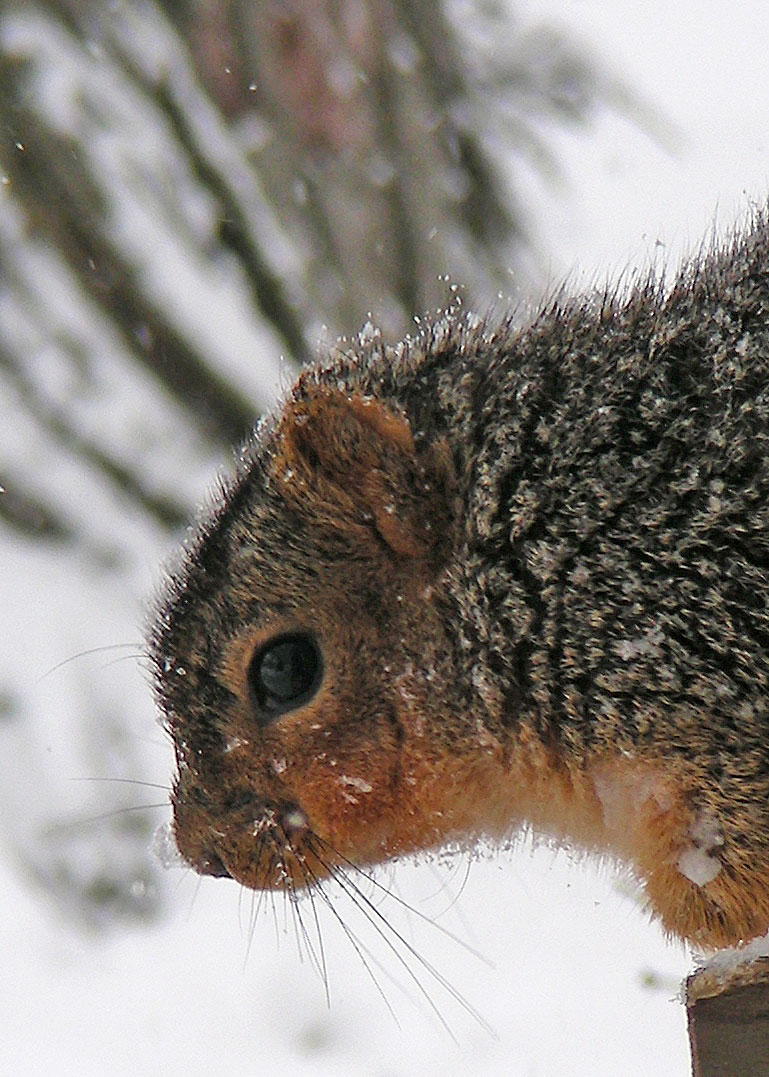 And there you have it!

I hope that answers your question, Agata!

And although it took forever to read this very long post, the actual fixes on the photo took about five minutes. So go forth and try these tricks yourself.  There's no telling what kind of magic you'll work on photos you cast aside!

Well, thank you so much Deborah! I feel very special that you go all this trouble because of one little question! Now that you've explained it thoroughly, I must say that I use those functions partly although the unsharp mask is a very quizzical tool to me. I almost can't see any difference while playing with it, strange I know... But i've learned an important thing from you: that is this color cast thing. And for this (as well as for your kindness) I'm eternally grateful! Hugs!

Now that I'm thinking about it, I learned two more things. 1° about shadows/highlights - those sliders do frighten me but not anymore! 2° the rule of thirds, never enough hearing about that... ;-)

Wow Deborah that's amazing! Thanks for the brilliant tutorial - I'll really have to try some photo editing programe.

Thank you so much for showing all of that Deborah. I have cropped before but am reluctant to try the other stuff but this made it look so easy and understandable. awesome

What a wonderful tutorial Deborah. I loved the easy to follow instructions you have used & that is one cute lil' critter :D.

You did the tutorial splendidly! YES, Deborah, you did do something (NICE) for us :)

Wow, thanks for unlocking those secrets Deborah! My pictures of the cat will look even better from now on!!!! Jo x

thanks for this thorough tutorial, Deborah! I sure hope that Lisa will be doing more of her photo tutorials, too! =)

Thanks for sharing all this info with us Deborah! I always need help in this department!

Thank You! What a neat step-by-step explanation of how to fix a photo! I LOVE the final result you got - WOW.

Great Tutorial Deborah.....Love learning how to better my Photos.....
Hugs!

Wow! That photo is stunning and your article is awesome! I've played around with the levels and colors, but never the shadow/highlights. I'm going to have to see if I can find it in my old archaic PSE2 and give it a go! Thanks for sharing!