Because of my stupid back issue I had to hop on the ol' Econo-time Line to make my card for the May Card Chain Challenge. I'm not supposed to be sitting at a desk, so I was trying to be very fast and stamp some images and color them in bed. But after botching several attempts to get a clear impression of a Greeting Farm floozy, I decided it would be best to print a digital Greeting Farm image (no chance of screwing that up). When I had finished coloring my little kiddie, I sneaked upstairs to cut some Nestie backgrounds, stamp a sentiment, and grab a few bits and pieces to assemble the final product... in bed. (I wanted to give Elise a "fancy" card but that kind of desk time was out of the question, so I needed to keep it simple but snazzy - and bed-compatible.)

It took very little time, and I was rather pleased with how easily it all came together for me.

There was a reason for that, I later found.

I ended up pretty much stealing a card design.

Although I didn't start out intending to steal, honest! I didn't even KNOW I was stealing. I thought I came up with an "original" idea, but my subconscious was obviously carrying a torch for a card I'd already seen and admired. Gigi, upon seeing my card, said, "Hey that looks like that one lady's card!"

I've been spending time with Gigi visiting blogs in spook mode, (my impatient daughter won't allow me to leave comments - and I'm not supposed to be typing, anyway) and I've seen a LOT of cards lately, so referencing "that one lady" was hardly helpful. Now, as it turned out, I deduced "that lady" by studying "my" card's elements. Who would be likely to make a card that looked like this one?

My friends Donna Mikasa and Kelly Booth both like to make square cards with Nestie shapes - and they both like to color Greeting Farm images with Copics, and I LOOOOOVE their cards, so I figured their photostreams would be the most logical place to start. We looked at Donna's photostream first, and I found the real "original" of my card (go here to see it).

So my apologies, Donna! Just think of it as a tribute to your phenomenal card-making abilities. Out of all the cards I've seen recently, yours was the one that captured my creative soul!

So here's my version of the card: 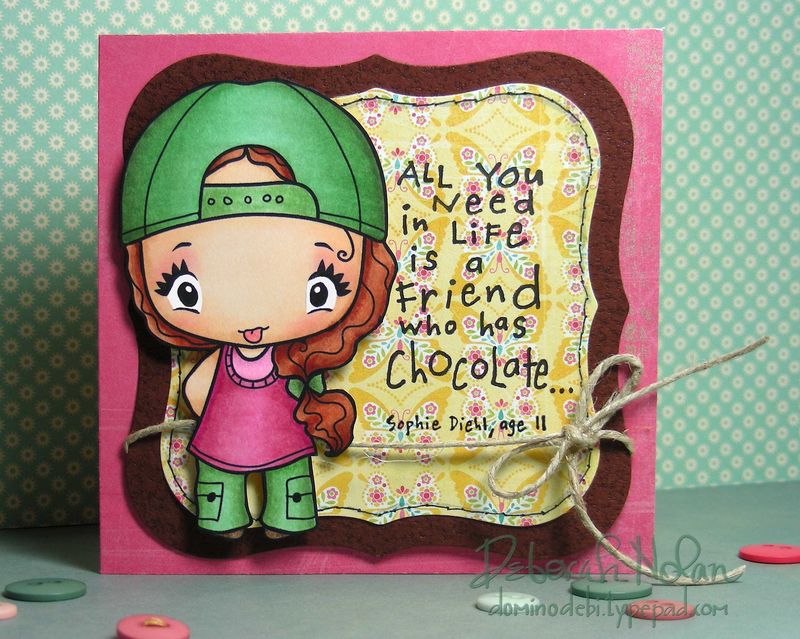 The interior of the card reads: "I have chocolate!"

LOL - you are a scream Deborah,... don't they say that imitation is the highest form of flattery.... or some such thing. I would rather think that Donna's card gave you inspiration.... It is an awesome card.

your coloring in bed is amazing!! =) LOVE this adorable card! the sentiment is the sweetest! i can see the Donna influence, but you made it your own! Donna will love seeing this for sure! =)

Fabulous card, Deborah! Your coloring is absolutely PERFECT! Wow! Hope you are able to get some relief for your back soon!

LOVE Your Card Deborah....Audrey is just so fun!! Donna will be thrilled she inspired you.....Thise kids Quotes are just perfect!!

Gorgeous coloring, Deb! Wow, such pretty paper too! I don't think Donna will mind at all!! My favorite part of this darling card is that sentiment and what it says inside! So fun! :)

Hi, Deborah! Adorable card! Love the sentiment! And totally amazed you accomplished this given the pain you must be in! Wishing you all the best and the speediest of healthy recoveries! :-)

Adorable card, Deborah! I love your determination to make something lovely despite your current physical challenges. You certainly took full advantage of Donna's wonderful inspiration. Love that sentiment, too!
bless you,
nancy

Amazing coloring! Girl, you rock, stolen layout or not! ;-)

Amazing colouring & Such fun - great sentiment. Where do you get your Inkadinkado stamps?

This is GORGEOUS Deborah.. i love every inch of your card.. your coloring is fabulous.. and you know what, super talented ladies like you and Donna sometimes think alike, so i don't think that you steal Donna's design.. we're all have inspired by each other but i know that you have your own style Deborah.. and i'm so glad i can see it here!! HUGS for you :)

Hehe, I bet everyone has accidentally stolen a card design in their life! It happens in music too, with composers (if that's any consolation) :)

Stephanie, so funny you mention musicians! When I saw Donnas card, my first thought was, Now I know how George Harrison felt! (He was sued by the owners of Hes So FIne because those three title notes just happened to show up as the three title notes for Harrisons My Sweet Lord. And the court found George guilty!!!)

You're so funny, Deborah, but you know that. :) You still made it your own, love the sentiment, it is sooo endearing, especially the inside! Sorry to hear about your back struggles, but hopefully next week will bring relief with PT! Hugs and prayers!

What an ADORABLE card Deborah! Great designs and awesome coloring! Thanks for visiting me!

Thank all of you for making me feel like an admiring imitator and not a thief! LOL!

I get my Inkadinkado stamps from JoAnns.

DEBORAH! I just saw this tonight--June 14th! Why am I not getting your blog updates?? I feel so bad! I am sooo flattered that my card inspired you to create such a beauty and now you can inspire others! I think I did see this in the Flickr pool.....just never made it to your blog til' now! Hope you are doing better and getting stronger by the day. Bless your back.....