Let's Focus on the Positive

I'm thinking this morning of the folks who voted for Romney and how disappointed they are. (This group includes all of my family, most of Spouse's family, and a good number of our friends.) I know what they're feeling because I felt exactly the same way when Bush was re-elected, and I truly hate that any of us ever has to feel devastated by the outcome of an election.

I think Spouse put things in perspective a few weeks ago when he noted that no matter which candidate won, neither was so unfit that they'd drive America off a cliff. This country has been through some rough times, but even during our very worst economic periods, we have always been better off than just about any nation on earth - and I suspect we always will be.

Most importantly, though, whether you voted or not, let's all come together and look for the common ground that unites us, because, when you come right down to it, we all want the same things: a job, a roof over our heads, the ability to take care of our families, and the freedom to worship and speak our minds without fear of reprisal.

Over half the world's population will never have any of what we already possess, so let's focus on our blessings, continue to support one another to the best of our abilities, and strive to deserve the legacy which so many of our citizens have died to protect.

Thnaks for stopping and have a blessed day,

Pass it on, if you agree! 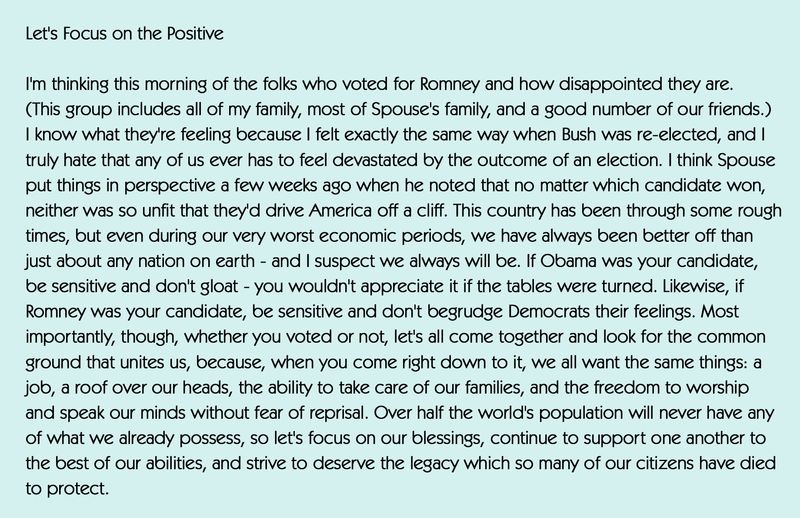 thanks deb for your positive perspective - i am so disappointed with the way it turned out, but i voted and will only hope and pray for the best for this country.

Good word, Deborah!! I keep reminding myself that my God IS on control and He is GREATER!!!

Amen, Deborah...
Half the country was bound to be disappointed, but now is not the time for pouting. Chin up, shoulders back and let's get this party started. Our representatives showing a good attitude now regardless of affiliation is what gets my attention. :)

WHAT A BEAUTIFUL THOUGHT!