School has finally ended and I'm free for a bit - yaaaaay!

And the very first thing I wanted to do was have a sit down with my new Spectrum Noir markers and blendible colored pencils. I decided to color a digital stamp - Mad Hatter by Hannah Lynn. (Isn't she the pouty one?)

And here's my Mad Hatter: 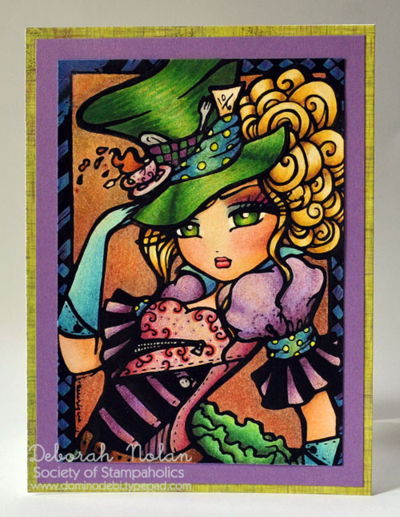 This is a long list of markers and pencils (especially) because I was experimenting from the git-go.

(I used almost all the colors in the Primary set, so that's my recommendation if you're looking for something with a lot of variety; the Primaries set would be my next recommendation for color variety.)

This was my first and only attempt at coloring this image, and, despite some flaws, I'm pleased with how she turned out. My biggest problem was with her hat.

It drove me mad.

I so muffed the hat that I ended up printing the image again, coloring it, fussy-cutting it, and then pasting both the brim and the top bit over my botched job. (I was satisfied with the coloring of the scarves around the hat in my original attempt so I let that stay.) And I'm still not quite happy....

I also decided to try something new... I went hybrid.

I laid down the base colors with the Spectrum Noir markers first and then shaded with the colored pencils. I did this for two reasons: (1) you can get a brighter palette, overall; and (2) I just felt like it. Should you try this, make sure you don't reverse the process; the wax in the pencils will wreak havoc with your marker tips!

SOME OBSERVATIONS ABOUT THE SPECTRUM NOIR MARKERS

There are 150 different colors to choose from, so there's a lovely amount of variety. I think, probably, the trickiest thing for me was adjusting to the marker tip. I'm used to the Copic's flexibile brush, and the SN's brush tip is shorter so it doesn't have the flexability of a Copic. At first I was clumsy with them, but as I continued to play, I started to get a feel for how to use them.

Basically, I needed to lighten my touch quite a bit. If you let the marker barely skim the surface, you're on your way. I didn't play around with blending the markers very much as I wanted to use the pencils for the blending. Again, the trickiest part was the harder tip. However, I think it's all a matter of repetition and getting used to this type of tip. Time will tell!

SOME OBSERVATIONS ABOUT THE SPECTRUM NOIR COLORED PENCILS

I'm a Prismacolor pencil owner, so they're my basis for comparison. For starters, there are 140 Spectrum Noir pencil colors, and they were developed to match the markers, so, again, we've got a ton of choices, and I like that! The wax content feels much higher, so the first adjustment I had to make was how much pressure I applied when coloring. I already have a very light touch, so this was a little bizarre; I felt like I was barely touching the paper.

However, this isn't a bad thing. The pigment glides on very smoothly as a result of the extra wax, and it's fascinating to watch your hand go over a spot with so little pressure and watch the color slowly deepen. If blending poses a problem, these pencils just might be your dream come true!

NOTE: I don't know how these pencils react with Gamsol or other blending agents because I don't use them.

Posted at 05:00 AM in Cards, Spectrum Noir | Permalink

Interesting post. Thanks for the in depth and tips. Hope you are relaxing. Hugs

You're coloring is amazing!! I could only dream of coloring half as well as you.

This card and your coloring is AMAZING! I can't stop looking at it! Really...it's beautiful work! Thank you so much for taking the time and giving so much detail to your experience with the Spectrum Noir products. It really does help soooo many people to get those tips and helpful hints. We really appreciate it! I can't wait to see more!!! ;)

Thanks for the review - you obviously know what you're doing. Was very helpful. I have no background with markers so when I bought the whole set of markers I "was busy" and didn't find time for them and they all dried up. Soured me somethin' fierce! I'm getting the pencils for Xmas (I come from Prismas too), so I'll see how I do with them. REALLY want to be able to shade better! Then maaaybe I'll try the new markers that are apparently much better than the old ones. But $900 for refills?! Beyond belief.