Welcome to Day Two of the Memory Box and Poppystamps blog hop!

Soooo... not only is there eye candy galore, but there are also prizes to be won!

You have until December 10 to leave a comment here. Winners will be selected at random from comments left at the Design Team posts and will be announced December 15 on both the Memory Box and Poppystamps blogs. Get the deets.

By the way, in case you didn't know it, Dave Brethauer (the owner of, and designer extraordinaire for, MB and PS has opened an online shop: Birch Press Design. You should definitely check it out - some killer merchandise up in there! One of the apron designs at Pirch Press Design.

Today's winner will receive the Birch Press Design Apron Winner of her choice – Memory Box and Poppystamps will each pick one winner.

So before we go on, I got some 'splainin' to do.

I teach at IUPUI and the University of Indianapolis, and we're in the final week of classes, so I'm losing my mind (as I do every semester around this time). Being sleep-deprived, I totally forgot our hop theme is tags and treat-wraps... and I made a card instead. (Oh, the humanity!) However, I made a Christmas treat box/place card a few months ago, so I'm going to repost that here and hope you (1) missed it back in July; or (2) saw it but had totally forgotten about it. 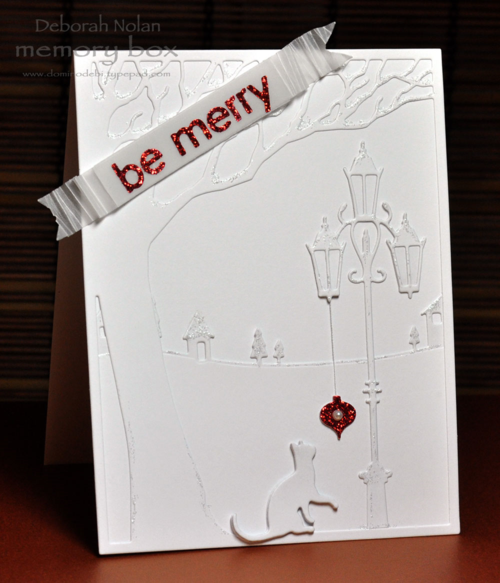 And here's my treat box: 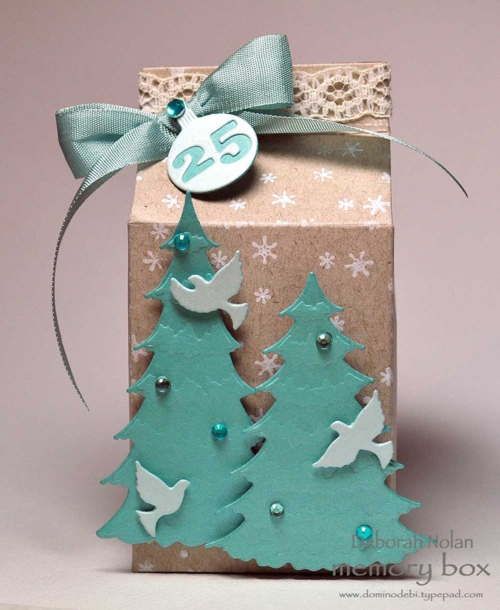 Your next stop is Marybeth Lopez's Marybeth's Time for Paper.

Today's Hop Order (in case you get lost):

These things happen its a very busy time. Love your card anyway. The white on white with the pop of red is gorgeous. Great treat box, love these colours too

Too funny, I can totally relate to making "not the quite right thing"... I do love your card, you can pretend that it is a large tag, lol.
Hugs,
Antonella :-)

I love both your card and your tag. Thanks for sharing both of them today.

OOps- I meant that I love both your card and your little box (it's really too early in the morning for me to think straight - sorry for the confusion.)

Hi Deborah, I think your card would look wonderful on any treat :) You are not alone and nice recovery with your beautiful treat box! Love the birds on those beautiful trees! Your card is gorgeous too!

Haha! Well, I didn't see your tag back in July, so it's new to me! And it's absolutely gorgeous, as is your card! Beautiful work on both of these! :)

Both of your projects are soooooo elegant. Enjoy the "aqua" color of the trees.

I love the color combination in your treat box! So pretty!

Beautiful projects! The white on white is so elegant and what a sweet scene! The treat box is perfect too - love the lace trim and the pearls on the trees - gorgeous!

Gorgeous card Deborah! Winter-y wonderland festive! Love it! and yes, I remember your pretty box and your fabulous choice of paper colors! <3

Beautiful card and seeing your treat box is a first for me so it's all good! Happy Holidays to you, Deborah!

Card or box both are lovely. Like the paper on the box.

These are both gorgeous. Love the white on white!

What a fabulous scene on your card. I absolutely love the kitten trying to play with the bulb. I have adopted black kittens that are 6 mos. old now and such a joy!
Love the trees against the kraft like paper with the precious snowflakes on it. Fabulous project!
Thanks for sharing with us! So very nicely done!

Both of your projects are fabulous. Thank you.

So cute! Thanks for sharing

They are absolutely darling!!!!!

Gorgeous projects!! Both your card and treat box are really pretty!

Love both card and box. If you didnt make the card it would have been our loss. There is always a reason for mistakes and here is a great example they aren't really mistakes they are a work of art.

the box and card are great

Both of your projects are fantastic. Thanks for sharing.

Gorgeous cards Deborah. Just love the white on white one.

Awesome projects Deborah...thanks for the wonderful inspiration for the holidays!

OMG you are so funny. Great card and treat box. Hugz

Deb - Love, Love the card and the box is inspiring as well. Of course I can't get enough of cards, so glad you were distracted enough to make that one!

Such pretty projects...love the white on white with pops of red on your card and the box? I've been smitten with kraft and aqua lately....gorgeous treat box.

Beautiful card!! is my favorite!! although your milk box is beautiful too!

I love your ideas. I love the cat playing with the ornament, it makes the elegant white card 'fun'. I'm impressed with your gift wrap, the colors are so pretty. I will definitely be using the wrap idea this year.