Hello and welcome to the final day of the 2011 Hero Arts Hostess Blog Hop (or Hoppin' with the Hosti, as I like to call it.)

If you're just joining us, the blog began on Monday and has continued throughout the week. Order of the Apron alumni have been sharing their take on the new 2011 stamps - and we've all been sort of standing around scraping our jaws off the ground (mine may never close again). To start at the beginning, visit the Hero Arts blog and click back to Monday.

Spouse gave me cling stamp CG266 Dancing with Flowers silhouette stamp for Christmas. I had some sort of brain malfunction when I stamped it on this card, though. For some reason, I used VersaFine black ink which is totally wrong to lie down atop a background wash of Twinkling H2O watercolors on cold press watercolor paper! So I had to darken everything with a black marker - which meant some loss of detail, but the stamp is very kind to those of us with ink issues! 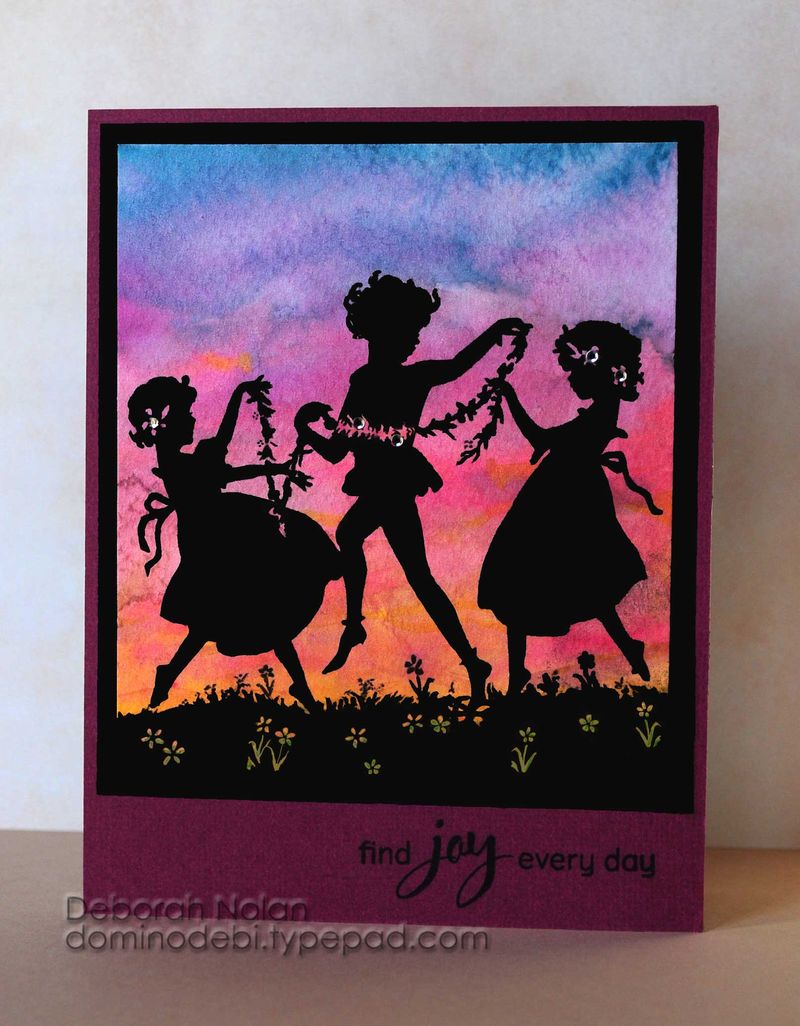 The second stamp I played with is another cling - CG271 Large Blossom. This is what I call a "fooler." I looked at it's black and white register mark and and was totally uninspired. But then once I actually stamped an impression and started adding colors, I became quite fond of it! For this card I heat embossed with white detail embossing powder onto kraft paper and then used Prismacolor pencils. (By the way, if you didn't know it, ColorBox Frost White is the BEST white ink for stamping, in my humble opinion.) The "white marks" on the flower petals are Stickles - they look really nice in person.) 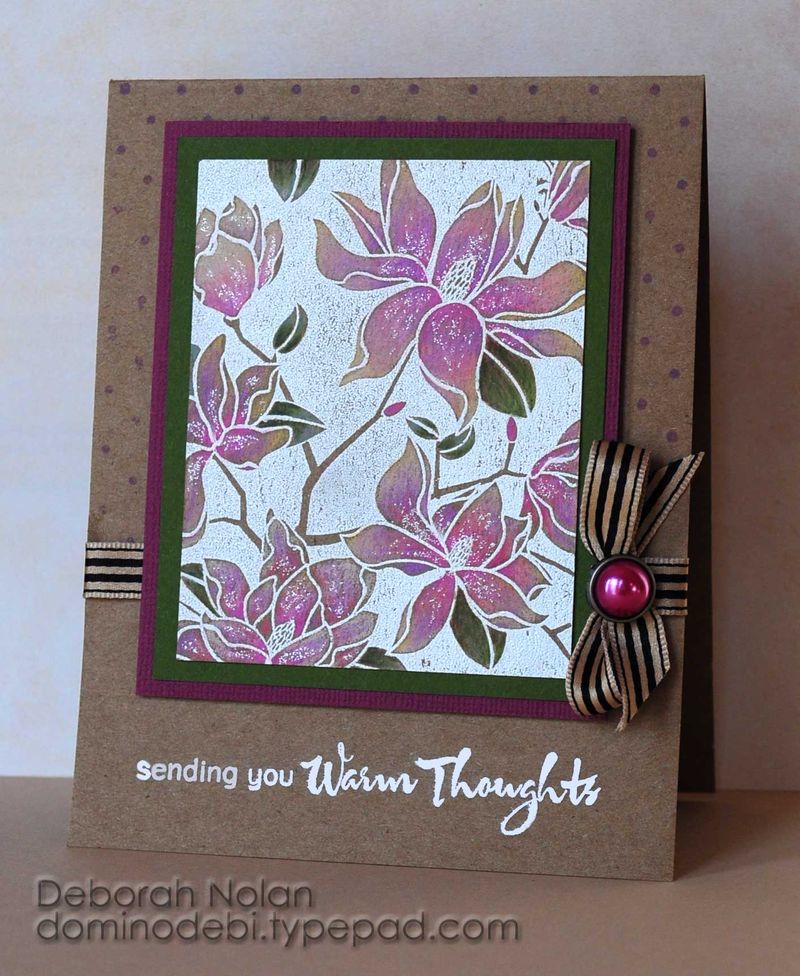 Now, on a slightly related note, I rewrote the lyrics to Let it Snow and posted them on the Hero Arts Flickr discussion board. A number of people requested I perform this today here on my blog. Gigi was game but we both felt goofy trying to sing to the camera, so we filmed something else to watch as we sang (acapella) Love to Stamp.

This is probably why amateurs shouldn't be allowed to own video cameras.

Just remember... you people asked for this!

(Eat your heart out, Madonna.)

Please remember to leave comments as you hop along; every comment left at every blog gives you a chance to win new Hero Arts 2011 stamps!

If you find a broken link, please hop back to the Hero Arts blog for the master list of blog links: http://heroarts.com/blogs/club/. Also, please email tami@heroarts.com and provide the blog address with the bad link so she can fix it. Thanks!

Your next stop is the uber-talented Vera Rhuhay - you're in for a treat!

How to Store and Protect Your Itty-Bitty Alpha-Betties

We are all sick and tired of losing individual alphabet letters from our stamp sets, so I thought you might be interested in learning about the method I'm using - a method that has served me well, I might add!

I actually filmed the footage for this video twice, but I realized after my first attempt, that I had forgotten to change from still-photo mode to video mode, so the first "shoot" never got shot.

To which I can only say... shoot! (Well, what did you think I was going to say under the circumstances?)

So I had to wait a few days before I got another window of opportunity, and I am annoyed to discover that it's been so long since I did my last demo, I could barely remember how to do anything in iMovie. And I must have forgotten to do something with the camera settings because this time my footage is a bit blurry. (Don't worry, though, it hardly matters - you'll see.) So what should have been a 3-hour task turned into about an 8-hour task.

You can see the video here, or you can watch it below.

My Stupid Camcorder - An Illustrated Story

I am fit to be tied.

I am seriously thinking that somebody out there doesn't want me to make any video demonstrations because I am being blocked at every turn. The only bright spot is that surely, SURELY there cannot be any other problems awaiting me.

Stupid Camcorder Issue #1 was a combination of many issues, if you remember. Briefly:

2. Then I discovered my digital camera had a movie feature.

3. But my memory card was too small.

4. So I went and bought a bigger one.

5. Only to encounter a new issue: overhead camera mounting difficulties.

7. Gentle swaying of chandelier insinuated itself in a not-so-pleasing way.

9. Which is when the battery finally died.

11. Footage revealed auto-focus feature insinuated itself in a REALLY not-so-pleasing way because it (a) kept everything in a constant state of blurriness as it tried to compensate for every move my hands made; and (b) loudly whirred each time it attempted to compensate - which was every 1.5 seconds.

Oh, and let's not forget the cat inserting herself right in the middle of my presentation. Twice.

Needless to say, I waved my dainty white hankie (soaked with bitter tears, no less) in surrender and skulked - yes, skulked - away from the playing field of home movie-making, a mere shadow of my former, happier self.

I think I may have taken to my bed it was so traumatizing.

However, I am a stubborn woman, so on January 24, 2009, I sashayed forward to try again. I purchased an Insignia digital camcorder from BestBuy after being assured that it would work with my soon-to-arrive Mac and its much-anticipated 2009 iMovie software.

As luck would have it, the Mac arrived two weeks later with a fried hard drive. Since the thing was built to spec, I had to wait another two weeks to get a new replacement (now we're into the very end of February).

I spent the next three weeks trying to reorient myself to Apple's operating system, so I had no additional time to play with my delightful little Insignia. Well, on Wednesday I finally had some time to play with it. Also, several people at the Hero Arts Flickr Group wanted me to post a video demonstrating a technique I used in this week's challenge.

Spouse screwed some fairly ugly chunks of wood into my attic ceiling to form a  somewhat crude bar from which I could hang my Gorillapod. I attached my camera (fully charged and packing a 4-gig memory card) to the Gorillapod and shot a 2-minute tester.

With a song in my heart and a lilt in my step I came back downstairs to upload my recording.

I was so excited.

So overjoyed that I was finally on my way to making a demonstration video.

I was so naive.

iMovie refused to recognize my film. QuickTime, however, loved it, but you can't edit in QuickTime.

And now it's time for Phone Support Hell.

I called Insignia. The first woman had such a thick accent and seemed so confused by my description of the problem that I soon lost confidence in resolving the matter with her. Or maybe it was just wishful thinking - because she seemed to be telling me that my little camcorder was not compatible with a Mac.

Despite the fact that the Insignia website declared it a match.

So I called Apple, and they told me that Insignia had to have a 3rd Party Platform for the camcorder for it to work with the Mac. AHA! (I knew there was a communication breakdown!)

I called Insignia back, jubilant - only to have my joy extinguished by the second rep who told me there was no 3rd Party Platform. HOWEVER! There were "many" free programs out on the net that would work to edit my digital recordings. I pressed her for some names, and she finally tells me Insignia recommends Arc SomethingOrOther.

Now I know the global economy is falling apart, but since when does "free" cost $79.99? And besides, I just bought a new computer with a lovely, much-recommended movie editing program. Why on earth would I want to spend $80 on ANOTHER software program - especially one I've never even heard of?

She was so very sorry she could not further assist me with my problem.

And I was so very sorry I couldn't throttle the saleswoman who sold me that problem.

So back I go to Apple. This time I get a guy who knows a Trick. Okay. I'm down with learning a Trick. Tricks are good. I will gladly learn many Tricks if it will solve my problem here. Because my problem is this:

iMovie (that elitist snob) doesn't "do" AVI digital files - it does MOV files.

QuickTime allows you to upload and watch your AVI digital files (mine looked very nice, btw). However, it won't let you edit them.

BUT! There is a free program (which really is free this time) that I can download
that will allow me to transform AVI files to MOV files within QuickTime Pro....

So this isn't really going to be "free" after all.

Fine. Whatever it takes. Let's just do this thing before I'm an old woman, for crying out loud!

We do this thing. He hangs up.

And I... discover that the metamorphosis from AVI to MOV is against everything that is Good and Holy. My original recording - clear and highly visible - is now a blurry, pixelated mess.

So it doesn't matter that now my files are welcome at iMovie's house party. I have a silk purse that has been transformed into a sow's ear (or worse) and everybody knows you can't make a silk purse out of a sow's ear!

(Forgive me, Dr. Carson, for resorting to a cliche, but my head hurts too much to render a more erudite phrase. Maybe later - when the desire to KILL SOMEBODY has abated - maybe then I'll be able to express myself in a way that behooves my education.)

I'll spare you a recounting of all the time, energy, and effort that went into persuading BestBuy to exchange the Insignia for something else. I think what finally turned them around was my waving several receipts in their faces - showing that I had spent over a thousand dollars in their store in the last six months - an experience I would henceforth share with their competitors unless I started seeing some appreciation for my customer loyalty.

In the end, I got an in-store credit because the camera I wanted (the one I double-checked was compatible with my Mac and iMovie BEFORE I left the house) is not in stock for another two weeks.

I left the store victorious but battered.

While I've been writing this, my digital camera has been charging. I discovered earlier today that I can turn off the auto-focus feature. So I am going to march right back up those stairs and see if I can make a demo, dang it! And I will prevail!!!

Unless I don't, of course.

I need everyone to think very positive thoughts....